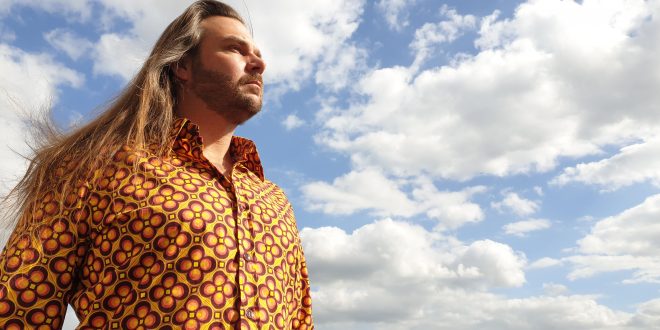 Even though I was a teenager in the eighties and I grew up with 80’s pop music, I love most music from before that era. Starting with the old jazz, blues and country guys from the 1930’s. My music is similar to the rock music from the late 60’s and early 70’s made by bands like Creedence Clearwater Revival and such. I guess that type of music is called “classic rock” nowadays. Can I call my music “classic rock” without the songs being classics?

I’ve been an Elvis Presley fan since I was 3 years old. He was the reason I wanted to be a musician in the first place. He is such an incredibly versatile singer. Also the first popstar to produce his own records and at the age of 21 at that!

As songwriting goes, I love guys like Bruce Springsteen and John Fogerty. Somehow they can write an entire movie plot with relatable characters and stick it in a short and catchy tune. Amazing.

One guy that does that really well too is Tony Joe White. Him and Alvin Lee (singer and guitarist of Ten Years After) are the two guys that are my “dads” when it comes to playing guitar. They both are blues players, but within a rock / pop realm. That usually is the angle I’m looking for when I write a guitar part or play a solo.

What do you want fans to take away from your music?

As a songwriter I used to be quite a downer. I wrote songs about tragedy, loss and sorrow. Probably because I was in a bad place at the time. The songs I write nowadays are more uplifting, about enjoying life and love, of getting back up instead of being/staying down. I can still get snarky or cynical at times in my lyrics, but mostly it’s joy. And that’s what I want people to take away from my music. It’s a short life. Let’s enjoy it to the fullest.

How’s the music scene in your city?

I live in Tilburg, the Netherlands (an 80 minute drive south of Amsterdam). It’s a kind of industrial city, so it’s not really pretty or anything. It’s just a big city. It has plenty of bars, clubs, theatres and concert venues. The music scene is equally diverse, from classical to hip hop, from metal to show tunes and pretty much anything in between.

What is the best concert you have ever been to?

It’s hard to pick just one, because I’ve seen a lot of fantastic concerts. But I think the most special one was my wife and I having “VIP” tickets to a Paul McCartney concert in Amsterdam back in 2015. We were at the 50 minute soundcheck, he did a 3 hour show. His voice was a little ragged, but at the age of 73 he put on one hell of a show.

I’ve been doing gigs since I was 12 years old and I’ve pretty much played every nook and cranny in the Netherlands, I’ve toured Europe and the Westcoast of the US. I love road trips and traveling. So seeing different places and meeting different people is definitely the best thing about being a touring musician for me.

My latest release is a 4 song EP called “Floating Downstream”. It’s a “dream come true” kind of project. The drums, bass & keyboards of all 4 songs were recorded in Los Angeles by John Fogerty’s band (not CCR, but his current band with the mighty Kenny Aronoff on drums, James LoMenzo on bass and Bob Malone on keyboards). For every track I picked different guitarists and backing vocalists. For instance, I have Rock & Roll Hall of Famer Richie Furay doing backing vocals on one song. Awesome stuff! But the track I am most proud of is one called “Louisiana Voodoo” and that one has Tony Joe White on guitar. Unfortunately he passed away in October 2018 and my song is one of the last things (if not THE last thing) he worked on before his passing. I feel so immensely honored and blessed to have worked with him, one of my all-time heroes.

Even though I’m not really that old (just turned 45 this year), I have realized over the last year that I’m really old (school) when it comes to modern music marketing. I’m not a big fan of social media and I don’t really like streaming music. Heck, I was one of the last guys of my generation to get a “smart” phone! What I have learned over the last year is that rolling with the times is important. I’m hardly at “master level” when it comes to social media, but I have learned to talk to my audience and connecting with them through social media. If you can get past all the bickering, it can be really fun.

They say “never meet your heroes” and it’s always daunting to meet someone I idolize. But I have been fortunate enough to meet a lot of my idols and I can honestly say that I have never been disappointed. The closest I ever came to my hero Elvis Presley is recording and touring with James Burton (Elvis’ legendary guitar player). James is just the greatest. Great guitar player, awesome human being. I never asked him about Elvis, because I figured that’s who he has to talk about so often already. So we talk about regular stuff. Our daily lives, kids etcetera. One evening we were hanging out in his hotel room and I was telling a story about…I don’t know…something that really mattered to me… Anyway, after hearing my story James just said “Man, Elvis would have loved you”. So yeah, I’d still be scared to death, but I definitely would want to hang out with Elvis.

The Mark has just finished a recording session for a new single. Currently we’re looking at Nuno Bettencourt (Rihanna’s guitarist & producer/guitarist of Extreme) for mixing, but he’s really busy so unfortunately we haven’t set a date yet. We’ll have to see how that pans out. After that, it’s shooting a video for the single and shopping it around for release

Share
Previous “It Is Well With My Soul” (LP) – Soulful Femme
Next Barista “Open Sesame, Vol 1: Her Dress”