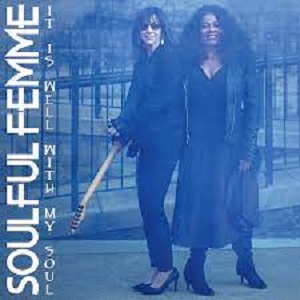 After years of performing as an extraordinary blues duo, it only makes sense to finally get in the studio and lay down a debut album, and for singer Stevee Wellons and guitarist Cheryl Rinovato of the group Soulful Femme, this is exactly what they decided to do with their time spent away from the stage in 2020. It Is Well With My Soul sees the prolific live act finally committing to a debut album they can be proud of — though they haven’t released an album prior, don’t be fooled by the recency; Wellons and Rinovato have been around and offering up phenomenal portions of beautiful jazz, soul, blues, and funk for years, be it in their solo outings or previous bands and collaborations.

So, while It Is Well With My Soul functions for all intents and purposes as a debut album for Soulful Femme, there is nothing debut about Wellons and Rinovato as performers. Stephanie “Stevee” Wellons has more than twenty-five years under her belt as a performer in live music and currently spends time as a teacher and vocal coach; her students are pretty lucky, too, getting someone able to belt and nearly overwhelm a song with such ease as their guide! Cheryl Rinovato began her career as a studio musician after graduating from Berklee College of Music with a major in Applied Music and a 2nd major in Arranging and Composition; it’s easy to see just why the talent within Soulful Femme is bursting at the seams. Both Wellons and Rinovato offer up an endless cache of experience and talent, and this “debut” album is a perfect display of the marvelous mechanics and chemistry between the two working at peak performance.

For fans of blues and jazz, there is much to love and chew on within It Is Well With My Soul. The compositions are next to none and the performance level feels established far beyond what one might expect from modern blues musicians, as the genre has more or less fallen by the wayside in regards to mainstream accessibility. Soulful Femme feels like an act plucked straight out of the golden age of blues and rock and brought to the present day, their core inhibitions and compositions calling back to that era of timeless musical flow and work ethic. Because of this, the album should not only work for established audiences of the blues in classic riff-centric hits like “Dead Man’s Blues,” but should also be a substantial and satisfactory starting point for anyone looking for a way to get started in the largely overwhelming and deeply-rooted genre through more contemporary and introductory “Trouble.”

Some other initial standout pieces include the opening and closing tracks, both named after the album’s title with one functioning as an introduction to the album and the other as its soulful outro, along with “Bitter Taste.” There’s a lot to get out of the album as a whole with its twelve tracks total bolstering a wide display of retro and modern sounds and features, and it more or less feels like there’s no wrong answer to a standout track within It Is Well With My Soul. Soulful Femme has certainly, brilliantly, further established themselves with this debut piece, and one can only hope there are plenty more to come from the Wellons/Rinovato duo.