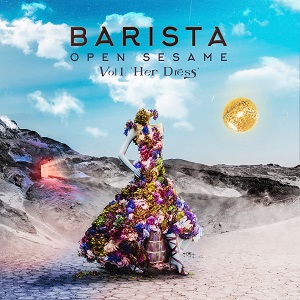 I won’t mince words, Vol 1. Open Sesame Vol 1” the album by Istanbul-based artist Barista (real name Bahadir Han Eryilmaz) is a musical tour de force. I think there needs to be a stronger distinction between those who love music and those who LOVE music.

What I mean is that in a time when plenty of artists exist more than ever thanks to the advent of tech that’s easier than ever to access, music, like a lot of media can be viewed as disposable, or the dreaded term “content”. You could not tell me that Barista doesn’t have an undying passion for music, because across the 7 tracks that make up Open Sesame Vol 1., you have no idea what to expect from track to track. Album opener “Circular Lives” starts off as a rock piece with obvious homage and love paid to the Journey classic “Don’t Stop Believing”, even going as far as to reappropriated its iconic “took the midnight train going anywhere” hook, but despite the engrossing wailing guitars and gruff vocals that are more reminiscent of latter-day Springsteen, the lyrics are a little more cynical than Journey’s power ballad.

Circular Lives is transparently about endless cycles of destructive patterns and how difficult it is to break out of them. Luckily it doesn’t hide behind a happy cheery sound in favor of something that sits between rock and a mood piece. From that first track, I thought I had a pretty good idea of what to expect from the rest of the record, and I was devastatingly incorrect. The album is very clearly a love letter to the 70s, 80s, and 90’s musical trends bouncing from Looking Glass jam “Her Dress” with its colorful wordplay and a more refined vocal performance that shows off plenty of Barista’s vocal talents. The real curveball hit me with “Disco Sun”, a near four-minute borderline instrumental that sounds like a Chic B-side.

The rhythm is funky and inspired and the vocals from the women involved with the project are pitch-perfect. It doesn’t feel like it’s homaging those sounds like how Bruno Mars did a few years back, it wholly embraces everything about Disco so unabashedly and the results are just spectacular. I would say another influence who can be felt is the lyrical and especially guitar work of Sting and the Police. In a Dream has this high octane rhythm that doesn’t feel like a car barreling out of control but like a smooth brisk ride down an open desert road. “Watching the End Begin, (Part One)” trades the hard rock sounds in favor of a grungy dingy inspired cynical ditty complete with musings over coffee and cigarettes, and as the album closes out we have the melancholic melodies of “Walk in My Shoes” with its downbeat psuedo-Pink Flloyd musings about loneliness.

Then there’s “Be Mine”. “Be Mine” is far from a bad song, in fact, it’s very good, but after seven tracks prominently about loneliness, dissatisfaction, ending on such a lovey-dovey bop feels, not disingenuous, just misplaced. Vol 1. is an incredible display of all of the talents inside Barista and it leaves you craving for more.

User Rating: Be the first one !
Share
Previous THE MARK
Next Marc Dorian – “Another Lucky Day” (LP)