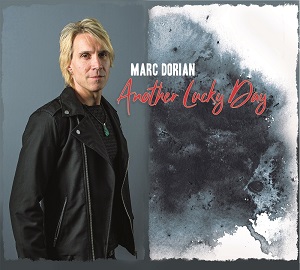 Singer and songwriter Marc Dorian makes life’s situations all sound so fun and so warm. Even when he’s singing about the loss of a good friend, he comforts and has a bit of a mischievous gnarl at the back of his throat. Where other blues/rock and roll artists rely on the blazing guitar solos or extended arrangements, Dorian makes do with super tight melodic music beds that feature an array of horns, organ keys, toe-tapping percussion and the occasional guitar riff that maybe just maybe melt a few faces. Dorian’s new album, Another Lucky Day is an ambitious outing for the Canadian now living in Detroit. It’s worth the adventure.

The album starts out with “The End of The Tunnel”, a song he released last year.  It quickly establishes Dorian as a very likeable vocalist. I immediately was drawn to his character-filled voice, and the way he crafts a song to have so many vibrant layers. It became more evident in the second track, “Young And Free” that his skills as a songwriter were lyrics, too. One of my favorite lines is those sweet memories meant the world to me. He’s talking about his summers at 16 and then at 21 amongst friends and coming-of-age. I loved the fondness in his voice, and he quickly transported me to his world of late nights, summer fun and friendship.

In “No Regrets” and “The Time Is Now” Dorian displays a keen sense of  guitar and key work. I loved how the songs sound rootsy and the icing on the cake is a more bluesy, murky finish. These songs sound live, as if he brought the live, concert vibe into the studio. He brings a load of personality and charm (as well as a sultry saxophone) in the song “Nothing But Trouble”. She got me wrapped around her finger, what can a poor man do, he sings, as the ivories are tickled. It’s a very fun song and just the right tune to hear in a club on a Saturday night.

The vibe changes, a bit somber, serene in “Someday”. I guess your time was through, Dorian sings. He’s sad, you can hear it in his voice. It cracks a bit differently; it floats above the gripping piano bed. Then, in “Take A Chance” the Americana sound, think Jackson Browne, comes out in his voice and in the arrangement.

He slows the tempo down and lowers the mood of the room with the endearing “You’re Not Alone” before cranking it up a notch and getting some grins in the sultry “Who Do’Ya Think You’re Foolin’”. Dorian brings such personality to his words and the music one would be hard pressed to not be constantly entertained on Another Lucky Day. He ends the record with the instrumental (a song he also released in 2020) called “Vicious Circle”. I found the track to be smooth and not anxious whatsoever. It’s like he sort of just walks off the stage, into the sunset on a pretty note.

Share
Previous Barista “Open Sesame, Vol 1: Her Dress”
Next The Hitman Blues Band – “Not My Circus, Not My Monkey” (SINGLE)