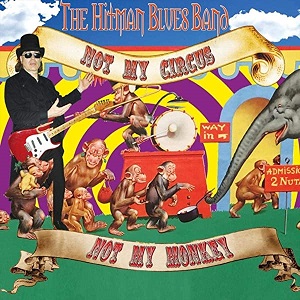 The Hitman Blues Band – “Not My Circus, Not My Monkey” (SINGLE)

Russell “Hitman” Alexander earned his nickname the classic way. Putting himself out there as a player capable of navigating various styles, including orchestral swing, jazz, salsa, and even Hasidic music, among other forms, kept the gigs rolling in, of course. It earned him a reputation, however, as a hotshot musician with the necessary virtuoso skills for fitting one’s self into any project. He’s a musician who can catch any curve balls you hurl his way. This sort of natural talent is much rarer than you might think.

His vision of blues, however, extends far past the Mississippi Delta. The Hitman Blues Band incorporates a vibrant horn section into their songs with Mike Snyder’s clarinet and saxophone highlighting many tracks. Mike Vitale’s baritone sax and Eric Altarac’s trumpet playing are important, as well, to the band’s overall sound. They played many festival dates and there’s no doubt, after hearing this album, they possess the firepower to win over any live crowd.

The band’s latest single “Not My Circus” continues their tradition of writing and recording worthwhile originals. You don’t have to wade through innumerable covers of “Sweet Home Chicago” from Alexander and company, they are eager to bring their own personalities to bear on their music and make a good impression. The track has a good length, as well, proving Alexander and his cohorts are served well by attentive inner editors that weed out any potential for self-indulgence.

It has an easy mid-tempo pace. The loose amble this song takes for listeners makes it an even more inviting listening experience though Alexander is wide to lift its emotional tension with piercing slide guitar. Despite its bluesy inclinations, there’s bright-eyed boisterousness present from beginning to end in this tune. It is far from some sort of dreary three a.m. blues and even Alexander’s voice gets in on the act.

He has some supporting vocals present during the track, but his wry detachment helps carry the day. We often forget that humor, understated or otherwise, is a key component in the best blues music; Alexander, fortunately, has not. “Not My Circus” has the right amount of hard-bitten sarcasm present without ever diminishing the source of its grievance. His voice isn’t compelling, he never overshadows the music, but it is nonetheless more than serviceable.

Some may decry his music as too old-fashioned to deserve any relevance. It is easy to disagree. So long as electricity continues flowing through the power lines, amplifiers continue functioning, and guitar players can find amp cords, there will be people writing and recording music like this. More importantly, there will always be an audience for it. It may never recover the commercial stature it once enjoyed, but it will likewise always matter. “Not My Circus” reveals The Hitman Blues Band as a tightly knit unit with many more miles to cover on their journey. It also shows Russell “Hitman” Alexander ranks among the finest guitar players, regardless of style, recording today and is far from finished creating a legacy.

The music of The Hitman Blues Band has been heard all over the world in partnership with the radio plugging services offered by Musik and Film Radio Promotions Division.  Learn more https://musikandfilm.com