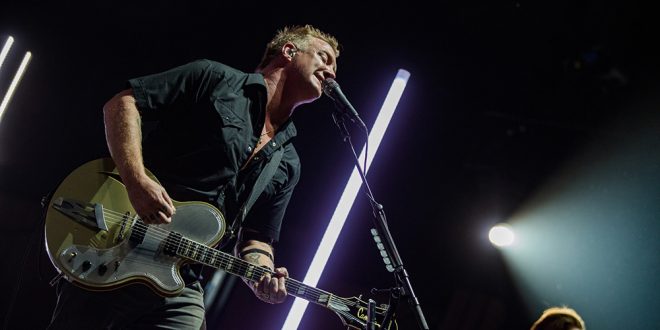 I swore to myself going into this concert that I would keep it to a few drinks and have a great time. We had an awesome group of dudes heading’ out (all Queens’ fans) and I really wanted to relish what was surely to be an amazing concert. Rounding up a bunch of friends and enjoying a debaucherous night out is something to be cherished in 2018, first world America.

It started out with grabbing an Uber ride up that-a-way. Jake wrongly told our Uber driver the way to go. Or did he correctly tell the driver the wrong way to go? Either way this caused us to just hop out of the uber in a traffic jam and walk across Seattle center to a bar on the other side. Jake took the liberty of peeing in public, right in front of MoPop. Hell of a guy that Jake Flatt.

Anyways, we were obviously feeling’ pretty good. In the bar it was obvious everyone was jacked for the show. It was packed to the rim but amazingly, and luckily, drinks were cheap. (Maybe that wasn’t so lucky looking back on it?). I think it only took us a max of 15 minutes to finish 2 drinks a piece there.

We then headed to a buddies house and finished off some whiskey bottles. No, they weren’t fifths or anything, the smaller ones. Pints I guess you’d say, nothing outlandish, however on top of the previous pregaming it was enough to make my head spin. Yea yea I know it was a bad idea but hey, YOLO.

Finally we arrive to the key arena and its kind of hectic. In my drunken stupor I said hi to a few people I knew. I’m not sure all of what was said but I’m sure it was the typical drunken banter of “Hey great to see you, I’m pumped….yea gonna be awesome….can’t wait….have fun”
By the time we got to our seats I was actually surprised at how close we were…I mean for buying seats at Key Arena that is. If you were looking directly out from the stage, we were back left but towards the floor. This had me excited but it only last a little bit.

First on was Eagles of Death Metal. This was my fourth time seeing them and honestly the worst time. Out of all 4 times seeing them I’d say the 3rd time was the best, followed by the 1st time. So maybe they’re like an every other show kind of band.

Regardless I still love them, in fact they’re one of my favorite bands, but a couple things combined to make it less than stellar for me. They were far away so I couldn’t see too clearly. For some reason the stadium had no tv screens (which would hurt the experience later too).
Boots Electric (Jesse Hughes) didn’t seem that into it, at least relative to the last show, so that sapped some of the energy out for me. Honestly maybe the blame lies more with me as I’ve seen this show 4 times before so perhaps the thrill is all ran out for me. I mean songs and everything sounded good, just didn’t really captivate me and to be honest, most of the crowd didn’t seem too captivated either. My drunk was pretty strong too, that probably effected my time as well. If it didn’t, it’s certainly effecting my memory.

Anyways after them came Queens of the Stone Age. This was my first time seeing them and to be honest, I was very curious to see what the fuss was about. I’ve always liked Queens, but I’ve never been a huge fan. I figured their live performance might be amazing. I was hoping for a “Primus” experience that I think I’ve talked about in this blog before. Basically, I was looking for a live performance to blow me away and show me exactly why they were one of the biggest rock bands in the world.

WELL I gotta’ say I had my hopes way too high. Granted, I was far away, they looked like stick people out there. Lights were awesome but nothing too crazy. Songs sounded just like the CD. Crowd was attentive but not too into it. I don’t know, it ended up just being a boring “movie theater” style concert.

Again, I want to reiterate I wasn’t in the pit. I’m thinking in the future for rock shows I should never be sitting. It’s just impossible to rock out in your seat. That being said, I just didn’t see anything crazy that made me think “wow these guys are crazy rock and roll badasses”. Alice Cooper put on one hell of a show. Primus put on a hell of a show. Eagles of Death Metal the Showbox with the Melvins put on a hell of a show. This show was just ehh. It was worth my money but honestly, I now understand why I don’t love Queens.

If you’re a fan and love the cds, go and enjoy the music. However, you could also turn on some Lava lamps and laser lights and put the cd on at home and have about the same experience.  After the show I quickly Uber-ed home and went to sleep. Nothing groundbreaking and my earth wasn’t shattered. For the final time I just want to say you can take this whole review with a grain of salt as I was drunk, which may have affected my judgement. Point remains I wasn’t captivated though, and with them being the “Villains” they are, I would think their rock show would appeal to drunken me.