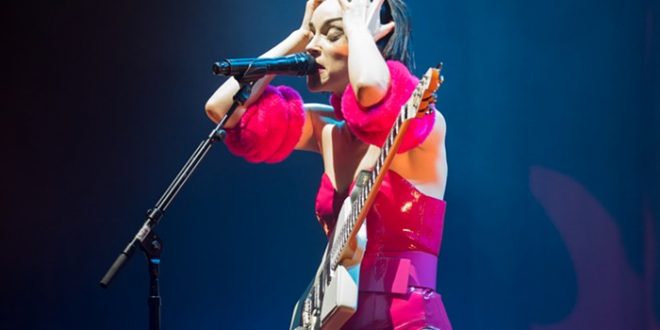 St. Vincent warrants a strong obsession. Seattle’s oldest theater, the Moore Theater, experienced this affinity first-hand as it brimmed with her fans last night (and will be again tonight), who ranged from crazed cheerleader types screaming marriage proposals in earnest, to the more aloof bystanders still pretending they hadn’t given in to her strange mercy.

She brought along her aunt and uncle to warm the stage on this tour, Tuck & Patti, who dexterously dueted through a covers set that included an extended version of Hendrix’s “Castles Made of Sand,” and an instrumental rendition of Stevie Wonder’s “I Wish.”

St. Vincent (née Annie Clark) landed in town supporting her fifth and latest album, 2017’s Masseduction, probably her most artistically vulnerable to date. Sonically, she sticks her neck out with more EDM-bound club-bangers, like the title track and “Fear the Future.” Emotionally, she’s reveling in recent breakup catharsis. Psychologically and physically, she’s intentionally opening up, bending over, and exposing her more hedonistic side to u.

The 35-year-old is as masterful and mercurial as a rising pop star gets. She shreds on her namebrand women-contoured Ernie Ball guitars (in all color assortments). She entertains through glitz and glamour under neon, highlighter-hued effects. She’s profane with an underpinning of raucous and rebellious attitude. She’s evolved from innocence to its absolute loss. She’s a femme fatale and an alternative sex icon to boot. And she’s a distinguished commander of her craft and style-savvy artistic vision.

Her art-pop does what pop does best, which is give the people what they want, and in the case of a 2018 St. Vincent show, they want to be stimulated and seduced. And she delivered. With curtains slightly ajar enough to accommodate her fierce figure, she entered stage right in pink, skin-tight latex body suit and matching stiletto-heeled knee-high boots. She opened with a motionless, power stance version of “Marry Me,” the title track from her 2007 debut, the strobes flashing white over her figure as she sang against a backing track, the way she performed the entire one-woman show. The curtains then fully widened as she chronologically ascended through her catalogue, striking off a few hits from each record. Being the adroit and theatrical exhibitionist that she is, she worked the stage in the round, licentiously strutting from one affixed mic to another for the first four distortion-riffing songs (like “The Strangers” off 2009’s Actor), before plunging the room in dramatic darkness.

After giving the room a moment to catch our breaths, she was back under a harsh spotlight, maudlinly sprawled out on the floor, belting out her more emo-tinged angst and balladry. After last year’s split with her “Young Lover” Cara Delevingne, you get the feeling Clark’s struggle and her own self-seduction manifests night after night as she writhes on that lonely stage. From her fetish-themed stagehands to the cast in the visually stunning videos that played behind her, it was clear that St. Vincent was there to induce a full amount of ogling and dancing from her seat-liberated fans. Whether you think she’s bought a little too much into the sex-sells clichés of, say, Katy Perry or Rihanna, you have to admit Clark’s a superfreak of nature who’s not to be reckoned with.

With all eyes magnetized and hypnotized by her juxtaposing of bubblegum with art-rock, she closed out, no encore needed, with a dominant decrescendo of orchestral tranquilizers like “Dancing with Ghosts,” and ended the show with “Smoking Section.”

Whatever it was that prompted the metamorphosis effect on St. Vincent over the past few years—a variegated-winged butterfly?—it allowed her to birth in reverse and reemerge from a new cocoon as her own evolution-mutated species, exploring and exploiting a new age of pop.

Share
Previous Jack White live at Warsaw – 23MAR18
Next Panic at the Disco get split in half?