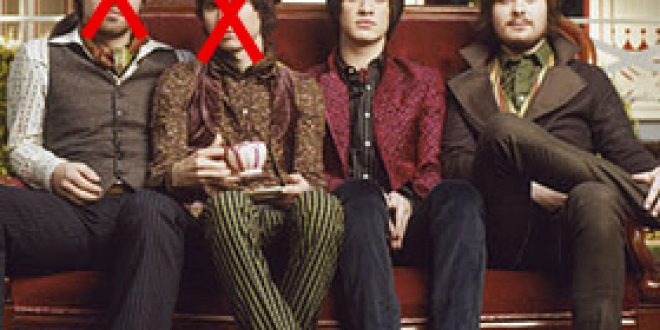 Panic at the Disco get split in half?

Via Myspace and a follow-up confirmation by their two former band mates, Ryan Ross and Jon Walker of Panic At The Disco have called it quits for the band, in order to “embark on a musical excursion of their own”.

The emo pop-punk-turned-folk rockers, Panic At The Disco have officially been split in two. On Monday morning, a mysterious blog entry titled “To Whom This May Concern:” appeared on the band’s Myspace page, and had this to say:“Ryan Ross and Jon Walker will be leaving Panic at the Disco to embark on a musical excursion of their own. Though the four of us have made music together in the past, we’ve creatively evolved in different directions which has compromised what each of us want to personally achieve. Over the years, we have remained close and honest with each other, which helped us to realize that our goals were different and that parting ways is truly what is best for each of us. We are all excited for the future, you should be too.”

This announcement was quickly met with speculation, and fans thought that hacking was afoot. Unfortunately, it was not some hacker’s weird delight to cause panic (no pun intended) amongst Panic at the Disco’s fans. Frontman Brendon Urie and drummer Spencer Smith posted a follow up, confirming that Ross and Walker truly had left the band:

“We just wanted to let you know, that the news of Ryan and Jon leaving the band is unfortunately true. It’s been an amazing journey being in a band with them, but sometimes individual tastes take friends in different directions and you can’t ignore it. They are some of the most talented guys we know, and we’re sure that whatever they do next will be great. That said, Panic At The Disco is alive and very very well.”

With Panic At The Disco opening on select dates for the closely approaching Blink-182  tour, it’s unsure to say what the situation will be, but most probably will be handled with a touring guitarist and bassist.