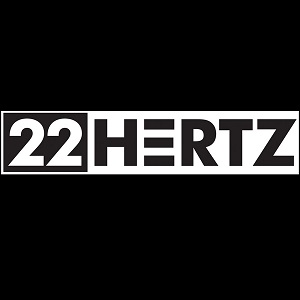 With the modern music industry landscape the way that it is, genres have become far more complicated than they used to be. Even at the beginning of the twenty-first century with the rise in satellite radio, Napster, and iPods, you could still flick on the radio and know what general sound you’d expect to get out of your speakers — nowadays, everything is blurred and rock music is at an all-time low in terms of popularity compared to modern hip-hop and rap.

Rock groups are falling by the wayside and disbanding, or they’re reverting to their old sound to cash in on nostalgia. Some tougher groups are doubling down on their sound and taking pride in the genres they call home, however; one such group, Canadian industrial band 22 Hertz, has no intentions of changing the path. With their latest single “Get the Hell Out,” you’ll agree that there’s no need to fix something that isn’t broken.

“Get the Hell Out” is a knockout song for 22 Hertz to return with after a five-year gap between their debut album Detonate — it brings in a mix of radio-friendly poppier hooks, or as poppy as industrial rock can be, and throws in gritty, fuzzed-out guitars and heart-pounding drums. 22 Hertz boldly summons their energy from a similar place as Nine Inch Nails, but the band’s lead singer (and overall musical mastermind) Ralf Muller owns his unique lane of industrial rock vocals by laying off the growling and aggression that Trent Reznor has made his signature style.

The band delivers on a catchy chorus and infectious instrumentation that will bring fans back for repeat listens without much of a struggle. “Get the Hell Out” is the best song to come from 22 Hertz yet and offers up stiff competition for whatever the band has coming up in the future. The long waits between releases only give Muller more time to amp up the anticipation, and it feels like something is coming soon.

While 22 Hertz has been remarkably quiet since dropping “Get the Hell Out,” I have a good feeling something new is in the works; I don’t see the band going heavier than they did on Detonate, as this new single and new direction seem to hint at a great middle-ground of harder, industrial rock and mainstream rock being attainable for the group, but with the time between projects anything is possible. 22 Hertz is a band known for taking their time, but the wait is never underwhelming when the end result finally arrives, and patience is key.

“Get the Hell Out” is a landmark single that can keep fans happy until the next chapter arrives, as its catchy aesthetic and intense percussive presence refuse to grow old with repeat listens. As Muller works fully solo and passionately on accomplishing the next steps towards future 22 Hertz releases, fans can rest assured that the music coming will remain as genuine, impressive, and catchy as the music found in “Get the Hell Out.”