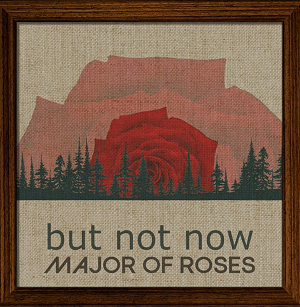 Major of Roses “But Not Now” (SINGLE)

Major of Roses, the nom de plume for Stockholm, Sweden’s Magnus Rosell, first debuted in June 2018 with his full-length album Cornerstone. This diverse collection recalled the work of artists ranging from Elvis Costello to Massive Arrack and set the stage for everything that follows. His new single “But Not Now” follows the 2021 single “Boy Oh Boy” and its promotional video released earlier this year.

Major of Roses places no limits on themselves. Wide-ranging diversity marks the songs of his aforementioned effort Cornerstone and continues defining his songwriting. His newest single “But Not Now” has a ramshackle meander present in the music from the offset without sounding too raw. The effect is deliberate. There’s craftsmanship underpinning that seeming affectation that helps set “But Not Now” apart from the vast majority of modern pop and the illusion otherwise testifies to his artistry.

It is unassuming, however. There is nothing about “But Not Now” that smacks of bluster or pretentiousness. The incremental development of the song’s groove never sound premeditated despite its obvious composition and Rosell lays a fitting vocal over top. The deep timbre of his voice has comparisons with other lower-register legends such as Leonard Cohen, but such comparisons are useless. Rosell’s voice is natural and far more inherently musical rather than  a vocal instrument adapting to the rigors of song, ala Cohen.

His facility with words holds up under such comparisons though. Rosell’s lyrics for “But Not Now” are direct and conversational yet there’s a smattering of poetry present in each verse that sends the words in another direction. There is no question that there’s great deal of interiority built into Major of Roses’ songs. Each track emanates from an unique headspace that never sounds alien but nevertheless possesses an one of a kind sensibility.

The production has a positive effect as well. Major of Roses doesn’t face several sonic bases to cover recording this song so their mandate is brief. It’s always a necessity, however, that any responsible recording artist maintain a balance between the vocal and instruments appropriate for the style. It behooves artists, as well, to orchestrate the elements of any song in such a way that it sustains listener’s interest for the duration of the song.

Major of Roses’ success is both areas is notable. There’s no sense of strain either in Roses’ presentation and the effortlessness of the performance suggests the project’s future is as boundless as ever. “But Not Now” achieves impressive unity early in the song and continues satisfying listeners all the way through. It is quirky, without question, and casual music listeners may face an initial hump getting over Rosell’s voice, but the rewards are well worth it.

Other artists are working in the same realm. There’s no question of it. There’s no question, however, that no one else brings the same exact flavor to recognizable songwriting you hear during this song. “But Not Now” doesn’t hail from paint by numbers country where every songwriting component falls into a comfortable niche. It’s rough, reckless, and unimpeachably Major of Roses.