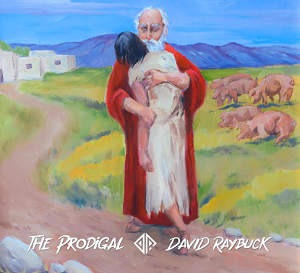 As light as feather but as affirming as a verse can be when coupled with a melody, “Words of the Teacher,” one of the songs included on David Raybuck’s new record The Prodigal, is built around its sharp vocal harmony without question. In this track, much like the other thirteen on The Prodigal, harmony acts as the very bedrock to every moving strand of melodicism that we’ll encounter, and when an artist like David Raybuck is leading the way with his velvety voice, there’s never any need to fear what’s coming around the next bend. These aesthetics are the bread and butter of his latest release, especially in its single-worthy track and acoustic video “The Pathway,” and they’re attracting some noteworthy applause from fans and critics alike this month.

There’s not as much definition as I would’ve liked for there to be on the percussion in the title track and “Desert Ride” (both of which are accented with vocals that sound almost more raw than the studio would normally allow), but that seems intentional on the part of Raybuck. In making the drums a limited feature in the master mix, we’re able to focus a lot more on the relationship between the vocal and the other melodic instrumentation here in ways we simply wouldn’t have been capable of enjoying otherwise. Raybuck uses a similar scheme with the lower tones in “Hosanna,” beat parts in “Who’s My Neighbor” and the stoic guitar ballad “Long Time Coming,” all of which are quite interesting if you fashion yourself as much of a harmony-obsessed listener as I do.

David Raybuck’s mission to create a surreal environment in The Prodigal doesn’t stop with the songs in its tracklist; in the arrangement for “The Pathway,” he combines stunning lyrical visuals with meticulously minimalistic melodies to avoid an overdone look altogether. The music in the background is already capturing the lion’s share of our hearts long before we’re ever able to fully immerse ourselves in the verses he’s issuing, and even when the scenes are moving at a steady flow, there’s no getting around the fact that the rhythm is still the most powerful element in the entire track. It’s hard to bring a song like this one to life in that context, but even so, Raybuck manages to do a great job.

If this most recent content is on par with what we can expect to be hearing from David Raybuck in the future, I think he’s going to touch on a lot of ground – and subsequently a lot of audience access – that had escaped the grasp of his contemporaries in the 2010s. Scene politics and posing for a premier opportunity to gain clout in the industry just aren’t important to Raybuck, and in The Prodigal, he makes it abundantly clear what is important to him – the music, and only the music. He’s still coming into his own and defining a sound that will eventually belong to no one else but him, but for the time being, I think we can collectively regard this latest record as his very best, and even more than that, his most honest.