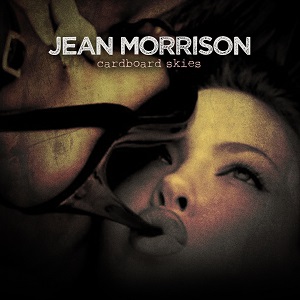 Jean Morrison sets the stage for his pending debut full-length with the release of the single “Cardboard Skies”. He’s reaching back a few years for the track actually to a standalone single released in 2015. Releasing it again serves a personal purpose as Morrison wants to honor the memory of his father who died several years ago just before the beginning of the COVID-19 pandemic. It’s a helpful way, as well, of getting his name “out there” again in anticipation of his new release and building some anticipation.

It’s a great representative for his talents. “Cardboard Skies” is a rare breed in 2022, a bonafide rock and roll anthem pulled out of the glam rock world of bands such as Queen, et al, without ever sounding like homage. It sounds, instead, as if Morrison and his producer/guitarist Dave Birch are seizing upon this style as a still viable vehicle for musical self-expression and the song’s sparkling power proves it.

It doesn’t have to strain to achieve its effects. The effortlessness throwing sparks from this song from the outset sweeps listeners away with its unstoppable momentum and the transitions carry you through. “Cardboard Skies” comes across as a song that possibly emerged to Morrison in a single setting, the early skeletal version of the song, and you’ll struggle to identify anything that sounds tacked on.

His vocals are a perfect fit. Birch’s production juxtaposes his voice against the instruments in a full and dramatic way, maintaining a good balance, and the light use of effects, backing vocals, and snappy tempo shifts hooks listeners deeper. Morrison’s assembled the ingredients for a winning song from the first second through the last.

The use of light and shadow, dynamics, is the engine driving it. The break during the second half of the song, for example, arrives with near perfect timing before Morrison launches us off once again. The rocking portions of the song certainly have a “heavy” sound, but Morrison’s “Cardboard Skies” is never flat-footed. This is a song that comes out of its corner swinging and, like a boxer, bobs and weaves at will.

There are some assorted post-production touches, as mentioned, but it isn’t anything that sends the song in one direction or another. Hear it as a bit of audio window dressing and nothing more, though it does underline Morrison’s musical allegiances for this specific track, if nothing else. Many listeners such as myself will hear the song as a breath of fresh air.

I believe Jean Morrison’s “Cardboard Skies” is the song of someone absolutely unafraid to follow their musical muse wherever it may lead them. You can’t help but cheer on such a willful refusal to tow the line in modern music. Talent will out. They won’t be able to deny this guy. Coupled with the fact that he has such top-notch collaborators helping him make it happen, it’s a virtual lock that Jean Morrison will remain a musical force for scores of years to come. I wouldn’t have it any other way.