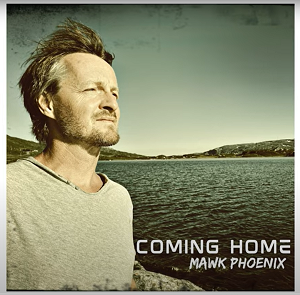 The highly accomplished Marc Dold, who also goes by Mawk Phoenix, has released his latest single, “Coming Home.” This is said to be one of many that Mawk has written and recorded over the last few years, that are due for upcoming release. Having provided music for film and television in Los Angeles for the last two decades, Mawk is most certainly a major industry player. His priorities seem to be minimalistic in nature though, and his newest single is said to reflect his present mindset. A reflective and somewhat triumphant piece, “Coming Home” is a promising arrival as it relates to Mawk’s new crop of material.

Bordering on existential, Mawk as any credible artist should, tries to find ways to reflect his world in an original way. He see the concept of “Coming Home,” as one that is akin to self-discovery. He believes we are all bound by the same desires, and he aspires to help make some sense of the human experience. His background and his work has had him firmly attached to a synth over the last few Years. However, Mawk made a return to his roots when he picked up a guitar, and has yet to look back.

“Coming Home,” starts with a mild tribal beat followed by some chanting in the same vein. Mawk doesn’t take long to come in, and stays with us through the duration of track. You could say the song blends a number of genres, but honestly, mood is paramount here. Mawk is deep and somewhat introspective with his performance, but never considers leaving us behind. It’s a song that has a mildly epic feel, that barely grazes 3 minutes.

It sounds a bit like Mawk was listening to The National when he conceived “Coming Home.” Due to his background in film, there is a poignantly cinematic undertone to the piece. Mawk’s voice is raspy and weathered, yet supremely administered. He emits an effortless but well earned aura of wisdom that gives him a Fatherly appeal. He manages to capture what feels both adventurous and introspective, without forcing his hand at any point. You emerge from “Coming Home,” wanting to hear more about Mawk and from him.

In terms of production and audio, “Coming Home” is pristinely captured. There’s a perfect balance of volume and a sense of dynamics that are both agile and tactile. The drums in particular are sweeping and enveloping, heightening the song’s sense of urgency with each passing note. You can easily hear this being a theme to the open of one of your favorite television shows, and the reason is of course, rather obvious. The unanimous takeaway here is that Mawk Phoenix knows how to write a song that will resonate with you, immediately.

Mawk has said that coming home for him means leaving L.A. for a quieter life on the Mediterranean. With his stage name being a clever play on phonetics of his real name, there’s no reason for Marc Dold to swim amongst the proverbial sharks anymore. He’s earned the right for an indefinite hiatus if that is indeed in his plans. The creative fire still and likely always will burn within him though, and the music business is better thanks to his presence. “Coming Home” is now available.