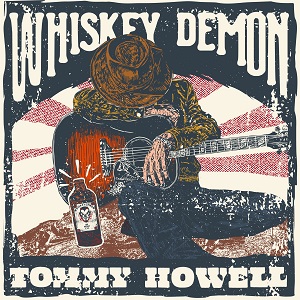 Thomas Howell has made a rare transition. The veteran actor, arguably most famous for his role in 1983’s The Outsiders, turns his hand to music with his single “Whiskey Demon”. Many actors are famous for moonlighting as would-be rock stars or singers, but few are memorable. The skillset of an actor isn’t easily transferrable to the musical world and the results often land as wish-fulfillment gone awry.

Tommy Howell, as he calls himself in this incarnation, avoids this. He brings a genuine lineage to the music that few of his actor/musician peers possess. Stepped in the gritty country rock leanings of The Allman Brothers Band, Howell’s “Whiskey Demon” also draws heavily from the outlaw country tradition without ever overtly identifying itself as such. Howell, likewise, benefits from hard, rewarding life experience.

His father, professional bullrider turned stunt man, Chris Howell likely shaped the younger Howell’s musical future. Likewise, Tommy Howell’s experiences as a team roper surely played a pivotal role as well. He transmutes these aspects of his life into rough and ready music that makes no apologies for itself and puts on zero airs.

Howell’s new single simmers when it opens. The soulful blues laced guitar weaves a spell during the brief introduction before we hear his voice. Howell isn’t perfect, thank god, and you can hear his natural speaking voice coming through every line. The measured growl in his vocals never risks affectation. His conviction is total.

The music reinforces the conviction. The single soon erupts into a stomping mid-tempo blues/country rock track that grinds into the changes with the same defiant ferocity we hear in the lyrics. Its traditional subject matter, a hellraisng hard drinker who lives by his own rules and takes shit from no one, strikes a fatalistic tone.

The subject matter may be traditional, but the writing is never cookie-cutter. Howell hits upon several satisfying rhymes over the course of song and the lines echo familiar themes without ever outright imitating anyone. It’s another reflection of how Howell has lived with this music and his influences so long that he has internalized them and they remerge for listeners in recognizable yet idiosyncratic ways.

Anyone looking to hear long and overcooked guitar solos should look elsewhere. This is no frills rock and roll that has no truck with virtuoso excess but, instead, embraces grabbing listener’s attention by delivering gut punch rock and roll country blues. The production is a big factor, as well, in the song’s ultimate success. Howell’s “Whiskey Demon” is steeped in bourbon-fueled grit and each instrument is represented in the mix with Howell’s voice landing on top.

Feels just like starting over for Tommy Howell? No, more like going home again. This is a man who, in the third act of his long and lauded career, has settled in for the dying of the light. Instead, he’s turning the flame higher than ever before with the benefit of age and, most importantly, skill. Tommy Howell’s “Whiskey Demon” is a great song.