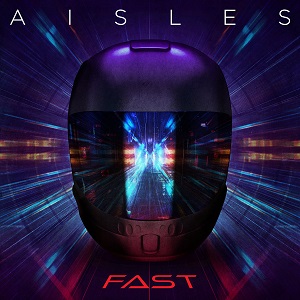 Despite the plethora of naysayers proclaiming the End of Rock, progressive rock has sustained strong ongoing popularity while other genres receded in favor. Particular regions of the world are hotbeds for such acts and South America is one; the band Aisles, first formed in 2003, is a Chilean six piece five years removed since their last full-length studio album Hawaii. They are preparing to release their first album since then and the single “Fast” is an early taste from this greatly anticipated release.

It’s the first album with a new vocalist at the helm. The band’s longtime singer Sebastián Vergara departed the band and his replacement, Israel Gil, kicks off his tenure with the band in an auspicious manner. Gil, despite his youth and comparative inexperience, commands your attention from the outset. He has an attention-grabbing mix of light in his voice coupled with a seize you by the collar gravitas that demands you take him seriously.

The vocals are a powerful element of the performance, but the production renders them a little diffuse at times. Other times they are very successful. Guitarist German Vergara is a more than capable second vocalist, however, and his voice blends well with Gil’s. It is impressive that, in the brief time Gil has been a band member, the band has so successfully integrated him into their sound.

The guitar work is flashy while still serving the song. The tandem of Vergara and Rodrigo Sepulveda draw from a diverse range of influences yet share a common dialogue apparent from a single listen. There are some particularly potent lead runs scattered throughout the track but the two guitarists, like the remainder of the band, take an orchestral approach to the song rather than a virtuosic one. Drummer Felipe Candia, bassist Daniel Concha, and keyboardist Juan Pablo Gaete are all long standing members and deliver impassioned performances as well.

The accompanying video for the track is a masterclass in animation. No amount of care and no small amount of cash fuels this promotional clip that provides a feast for the eyes as well as providing on-point visual accompaniment for the track. The creative engine driving the video, Vergara and Francisco Ortega, has produced a stunning visual work that will appeal to many. The lyrics are far from performed poetry but express universal human emotions. The primary quibble some will have with the lyric is how it feels a little like a collection of first lines rather than a full-realized songwriting work. It is, nevertheless, evocative and fits the musical arrangement well.

The song is credited to the entire band and that’s appropriate. Aisles plays like a cohesive unit from beginning to end and maintain the track’s furious clip without ever placing a single misstep. Five years between original material is a long time, even in the modern musical world, but Aisles has returned from the extensive layoff and a major lineup change sounding as capable as ever. “Fast” is an outstanding way to reacquaint yourself with this unit and newcomers, especially progressive rock devotees, will wholeheartedly embrace this release.