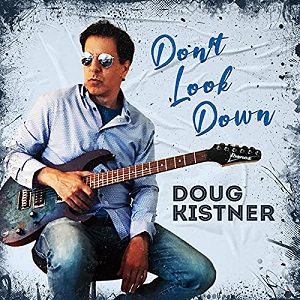 Longtime touring keyboard player and vocalist Doug Kistner stays busy working with former longtime members of Billy Joel’s band such as renowned drummer Liberty DeVito, among others, and Glen Burtnik’s Summer of Love project. His need to express himself, however, doesn’t end there. His creative passions, ignited in childhood, burning brighter thanks to time spent playing alongside such luminaries as the Trans-Siberian Orchestra, are further fanned by his solo efforts. Kistner’s latest single “Don’t Look Down” follows two successful prior 2021 releases and constitutes another long step towards establishing his reputation as a gifted solo performer.

The light staccato touch of the guitar and loose-limbed percussion set an early tone. Kistner’s voice mixes a clear declarative style with a dollop of emotion and the years he spent supporting other artists is evident. Balancing commercial appeal with a substantive approach is always a bit of a high-wire act but Kistner makes it seem and sound effortless. He knows the song’s demands and ably meets each one. There is a calm assurance, as well, laced through his timbre and it inspires a listener’s confidence from the outset. You know, as soon as the song’s first line hits, you are in good hands.

Kistner’s wisdom building the song around its rhythm track is soon obvious. The percussion carries listeners along in a much more decisive manner than the guitar playing. Each musical component, however, plays an important role in determining the track’s value. Nothing is purely ornamental. His songwriting instincts are sharp enough, as well, that “Don’t Look Down” runs an ideal length. Despite the slightly derisive label “yacht rock”, with the self-indulgence it implies, you will be hard pressed to find any fat weighing down Kistner’s work.

Some may believe the lyrics traffic in clichés while others will arrive at different conclusions. It is, without question, songwriting crafted to reach the widest possible audience rather than appeal to a niche, but Kistner achieves that goal without ever sacrificing artistic worth. “Don’t Look Down” is laden with familiar language but, despite its relative predictability, it will satisfy many thanks to the song’s writerly finesse. He knows where he wants to go, how to get there, and listening to his voyage is an enjoyable experience. Few people encountering this single will disagree.

The production is the superb final touching bringing the track together. Kistner spares no effort addressing the song’s needs, particularly balance, and achieves a polished sound that is never bloodless or studied. You may be expecting a relaxed vibe from material such as this but, instead, “Don’t Look Down” simmers with urgency befitting its title. Doug Kistner is fully invested in every line. It is a vocal showcase, no doubt, but he has succeeded in producing a well-rounded gem that has something for nearly every taste. It ranks among the year’s best singles and bodes well for his future work. He’s ready to step out of the shadows, bask in the spotlight, and invites each new listener to accompany him on his journey.