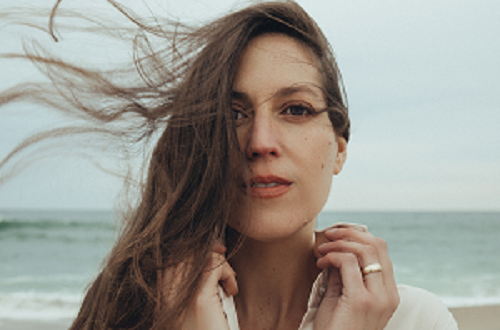 There’s a buxomness to the strum of the guitar we hear in the opening bars of “She’s Come to Sing” that is bound to make some of us assume it’s going to be the greatest gem in the track ahead of the 0:13 mark in the song. If you keep listening though, you’re going to find out that it’s merely the cornerstone of an instrumental charm just powerful enough to stand up to Brielle Brown and her amazing lead vocal, which on its own is more than enough reason to check out the all-new extended play The Well this June.

Made up of six different songs, including this one, “Concrete Stars” and “This Time Around,” The Well introduces us to a plaintive singer/songwriter in Brown who isn’t as concerned with neo-Dylan political verses as she is constructing something unapologetically unguarded and naturally transcendent in her music. This material has as earthy a feel as her lyrical narratives would imply to us in not so uncertain terms, and though it can be said that she isn’t the only exciting player to be making her debut in 2021, her work in this record left me utterly spellbound upon receiving my pre-release copy just this week.

“Concrete Stars” shamelessly flirts with country elements far more melodically broad-shouldered than anything the Nashville establishment has offered audiences in the past fifteen years, but I don’t think it has as much of a harmony-centric structure as “She’s Come to Sing” does. “This Time Around” and the guitar ballad “Let the Water” show us that Brown doesn’t want to be recognized for her voice alone, but instead the many-splendored gifts she can create in the studio when there’s nothing to come between the medium and herself. The latter has an artistic continuity with “Concrete Stars” through its use of a soft pop hook, but I would be lying if I said that the tracklist ever became predictable when listening to The Well straight through. There’s too much passion on the line for it to devolve in the same way a lot of indie rookie offerings do, and I think other critics are going to notice this as well.

“Skylark’s Tune” and the title track are two sides of the same coin poetically speaking, but their multipronged instrumentations suggest a desire to never remain boxed in by a singular theme that I don’t hear enough of in Brown’s underground world nowadays. She’s a very likable character as a musician, but moreover, she has an exciting component to her songwriting that extends from her approach to the way she executes when staring down a big moment in any given track.

Her poise and candor combine with the confidence and surgical precision she enjoys as a performer to make what more often feels like a juggernaut than it ever does a sampler of her stylized talents. Simply put, this is an artist I am so grateful to have found early in her career, as she is only going to get better from The Well forward.