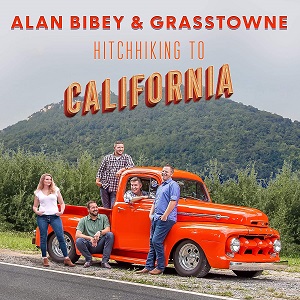 Hitting their stride inside a couple of seconds flat, Alan Bibey & Grasstowne get right down to business in the title track of their new album, the impeccable Hitchhiking to California, which was released this past January to acclaim from across the bluegrass spectrum. Although built on an enormous groove, this is very much an exhibition in tonal strength, paving the way for the menacing “Blue Collar Blues” beautifully without feeling too much like a mere intro song. Hitchhiking to California quickly shifts into a dirty dirge with the appearance of its lead single, and once more as “I Wanted to Be Loved (But Only by You)” comes into focus; you see, in this album, Bibey and co. are intent on keeping us on the edge of our seats through a spectacle of grandeur that is surprisingly efficient when compared with the competition.

Despite its name, “Lonesomeville” imparts kinship like no other song here, guiding us into the haze of reticent rhythm that is “Rhythm of the Rails” flawlessly – but not without leaving a mark on anyone who has just heard it. This tune is probably the most countrified song on the album, but it doesn’t make for an odd tracklist neighbor sandwiched between “Lonesomeville” and the instrumental “Messin’ with Sasquatch,” the latter being a shot of controlled adrenaline served up bluegrass style. Nothing here sticks out as being a centerpiece, but it isn’t because any of the material is lacking substance – honestly, I think it’s that every song on this LP sounds like it could anchor an album by itself.

“I Don’t Know When” pushes Bibey back to the role of mandolinist while Kati Penn takes up lead vocal duties, and for my money it’s one of the best slow songs here. Penn’s voice is fantastic in every harmony she’s featured in ahead of this track, but with the microphone to herself she gives a performance that might be enough to launch an entirely different project in the wake of this one’s success. We’re thrust from this tune into the arms of a buoyant cover of Supertramp’s “Take the Long Way Home,” but the LP doesn’t skip a beat; by now, one song is bleeding into the next, with “Crime at Quiet Dell” bridging “Take the Long Way Home” to a Darin and Brooke Aldridge guest spot in “Daddy & Me” though it was planned by some higher power all along.

We come full circle in Hitchhiking to California with a praise-filled closer in “When He Calls My Name” that tugs at my heartstrings every time I listen to it, and only partially because of the potently faith-based lyricism the song features. If you’ve ever had the chance to hear Alan Bibey yourself before this record, you’re already keen on his talents and ability to draw together some really breathtaking bluegrass in times we really need it, but this 2021 effort is a contribution to a healing nation’s soundtrack that deserves an additional level of respect. All I can say is bravo, and I sincerely hope to hear more content like this from the Grasstowne brand in the future.