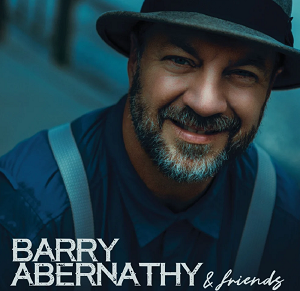 With a furious thrust, we’re quickly escorted from darkness into light on the back of a string melody in “Midnight & Lonesome” as strong as the southern wind in fall. As much as the name of this song might want to fool you, there’s no feeling isolated amidst the harmonies Barry Abernathy and Steve Gulley will conjure up here, nor those in “One Leg At a Time,” “Back in ’29” or “Lost John,” all of which can be found on the new album Barry Abernathy & Friends, out everywhere good bluegrass is sold and streamed this late February. Gulley, who sadly passed away last fall, isn’t the lone collaborator of note here – Vince Gill, Shawn Lane, Rhonda Vincent, Doyle Lawson and Josh Swift are also on hand for the excitement, and none of them disappoint. With the man who has given us Mountain Heart and Appalachian Road Show to guide them, they’re making incredible memories for us all in this LP.

All of the chemistry here is great, but the experimental “Short Life of Trouble” and “Birmingham Jail” with Vince Gill might be the most provocative of the lot. Gill is such a titan to record with that it’s surprising just how big a share of the spotlight Abernathy is able to ascertain for himself, and they never sound as though they’re at odds with each other creatively. They counter the swing of “Birmingham Jail” with understated melodicism more akin to a fun western than anything in the contemporary progressive bluegrass lexicon, and this easy-going spirit actually carries over to the Shawn Lane-adorned “A Train Robbery” and “Fall on the Rock” as well. Barry Abernathy & Friends usually feels like a backyard get-together because of its spirit, and, to me at least, that’s what makes it such a tough act to follow.

I didn’t expect the tenderness of Rhonda Vincent’s “You’ll Never Again Be Mine” or Dan Tyminski’s “Unwanted Love,” but given the heart Abernathy has been known to put into his work as a sideman before getting into the studio for this latest effort, I suppose I shouldn’t have been all that surprised. He’s drawing emotion from the other players here beautifully, while they’re doing much of the same for him; the end result is a collection of tracks that feel affectionate with one another, the audience and the bluegrass genre as it’s evolved into the 21st century. It takes a strong musician to show the kind of vulnerability we get in “Lost John” or “Back in ’29,” but lucky for us, this record is filled with them.

Whether you’re big on bluegrass or just now attempting to explore the genre for yourself, there aren’t many high-quality sets like that which occupies the tracklist of Barry Abernathy & Friends this month. From the strings to the singers and the poetry that serves as a buffer between the two, this album really puts an emphasis on attention to detail, and it’s something that I think Barry Abernathy is going to be remembered for when his legacy is constructed years from now – which, in many ways, was the goal here to begin with. His love for the music of true Americana is evident in the way he makes a record like this one, and I doubt other critics will disagree.