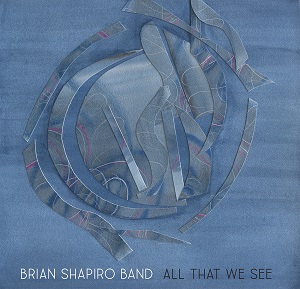 “All That We See” (LP) by Brian Shapiro Band

All That We See is the eclectic debut album from Philadelphia’s Brian Shapiro Band. Filled with crunchy guitars, tight percussion and some provoking lyrics, these nine songs tell a complete story. Even if you listen to the songs out of order, you are sure to glean a strong sense of who Shapiro is as both an artist and a man. He’s a citizen of the times and he and the band slay the truth with a rich blend of folk, Americana and rock. All That We See is told from his point-of-view but songs like “We’ll Take Them All” and “Why Wait” further connect us more than we can imagine.

Reminding me a bit of Frank Zappa, with clever quips and matter-of-fact singing, Shapiro’s social commentary shines through in his lyrics. That’s when I turn to wishful thinking, he sings in the opener “Three Things”. He’s very conversational, with a voice that is deep and meets at the crossroads of Zappa and maybe even Bruce Springsteen. Shapiro, who is also a performance artist, has a strong sense of confidence in his delivery. I like how he’s immediately comfortable and his songs at times feel like he’s singing to you in mid-conversation. Like you’re at  a coffeehouse with him and he just starts into song (with a backing band). It’s Avant-garde, but not too far off that you can’t tell what’s happening.

By the third track, “What’s Real” he’s enlisted a female vocalist to help shape his tale, give the listener and even broader sense of style. The songs on All That We See are everything that makes indie music, and American music so unique. In Shapiro you’re hearing the exhaustion of humanity, but also the exuberance of the human spirit. Three songs later, “Thin Skin” the haunting guitar build is matched by the rolling pitches in Shapiro’s commanding voice. So keep your distance and won’t you leave / just stay away / so don’t you get too close to me / because I will walk the other way…he sings. He has little melodic curls, almost yips, at the end of his vocal lines. I loved the way the guitar is almost pounded, like you think it’s going to drown out his voice, along with the rest of the instrumentation, but it doesn’t.

The last three tracks, “Away And Away”, “Gourmet Mind” and “Le Chein” mold together the finishing touches on an always-interesting album. The rawness is never so spellbinding as it is in “Le Chein”. The guitar drills, much like a Nirvana-esque tone, as Shapiro sings passionately in French. His voice ebbs and flows giddy-like, while a Dr. Who-esque whammy board trembles along. It’s far out and rather bizarre, but after a few listens, I kept wanting more. Perhaps the point of these songs isn’t exactly that the moment you’re listening you know what’s happening, but as they linger in your imagination, they ooze out like an ice cream shake spilling out from under the lid. You have to get that lick – and in this case, you have to get that extra listen.