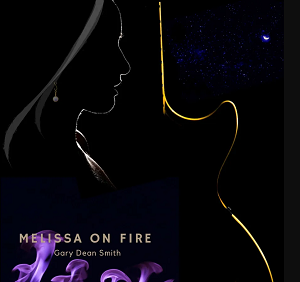 “Melissa On Fire” is the new sultry hit from crooner extraordinaire Gary Dean Smith. Jazzy with bluesy licks and raging female vocals to accompany his confident, debonair disposition, Smith sets the scene for a ravishing night and one that the listener is completely intoxicated. The dashing mood, the velvety voice and a swirl of percussion – it’s all there for the taking. “Melissa On Fire” is going to catch on, and it will spread like, well, wild fire.

She weaves a wonderful web of desire, Smith sings. He’s low key. He’s the singer you imagine in that smoky, burgundy-laced favorite jazz club in vintage Hollywood. The suaveness oozes in each vocal delivery, a smooth journey. The way she loves is divine…all that hair is black as the night, he sings. Dancing under the music bed current are a flute. It whispers its way through the song, exchanging moves with a sexy saxophone meandering throughout the groove. Nothing like when Melissa’s on fire, the chorus blazes through.

An incredible female voice (Natalie Mendoza) sings, she’s got a soul made of sugarcane. Her voice lingers, like smoke circles in that club of yesteryear. A lead guitar, bluesy but light, makes waves with the organ. It’s a cool sound, again transporting the listener into different realms, of jazz, blues and early pop genres. It’s easy to fall under Smith’s spell and Mendoza’s voice that champions his leading lady, Melissa. I was compelled to straddle between two worlds – one of fantastical visions and another rooted in the present. When you listen to a song like “Melissa On Fire” you become transfixed. I was completely in the moment and butter in the hands of Smith’s radiant voice, and exceptional guitar work. It’s an imaginative song, yes, but we all have that ‘Melissa’ in our lives that takes the lead, that coerces us into her graces. She’s sugary sweet, as the song says, but she can ignite anyone in her presence with just her presence alone.

“Melissa On Fire” is the song to play for the weekend. It gears up the listener for a swanky evening. It’s also one of pure devotion to this woman, Melissa, and the art of music. Smith has the listener right where things are supposed to align. He’s communicating his love, his adoration and it’s felt. You could cut through the sexual tension with a knife. It’s not easy to walk away with that feeling in just any song and I think he succeeds with grace and a whole-lot of commanding presence. It’s hard to say who is more breathtaking – the idea of Melissa or Smith’s voice.