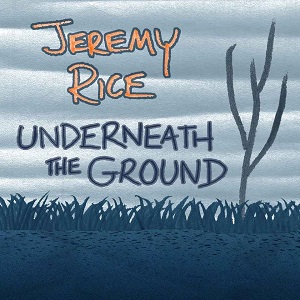 Jeremy Rice – “Underneath the Ground” (SINGLE)

Strikingly disciplined to the point of sounding a bit frustrated in a couple of memorable moments, the beat behind the music in Jeremy Rice’s “Underneath the Ground” plays a pivotal role in creating the energy through which the mood of the lyrics will be filtered. There’s already a lot of angst in the guitar part and a virtually menacing bassline circling from afar, but when tacking on the additional stress of the percussion, this is a single as in love with tension as a pop song can withstand. Rice plays it cool from start to finish with an easygoing vocal in the center of it all; his message here being one of remaining calm amidst even the harshest of storms (which I must say is quite appropriate for the times).

The swagger Rice gives off in his performance of “Underneath the Ground” is superb and not as arrogant as some might expect it to be given the success he and his band have been experiencing in the last couple of years. He doesn’t sound hesitant about any of the moves he makes here; instead, I would argue that he comes across as being rather sure of himself, to such an extent as to allow his emotion to bleed into the music even during the song’s most angular moments. This creates a sense of optimism on the other side of the hazy discord in the instrumentation, and it’s one of my favorite features in this single.

The harmonies are definitely the most saccharine element to behold in “Underneath the Ground,” as they intentionally play to a corny side of the pop music spectrum I would generally say does too much for a composition as black and white-simple as this one is. The video is similarly overthought, but in both of these instances I think it’s overwhelmingly clear that Rice’s heart and head were in the right place when designing the finer points of this release. It is true that the surreal component of the imagery in the video appeals to the ongoing trend exemplified brilliantly by his American singer/songwriter counterparts, and if the goal was merely to emulate that style with more of a melodic center (as is customary in his work), I suppose these flaws would be all the more excusable.

Though it might seem slightly overambitious in certain spots, the overall results of Jeremy Rice’s experimenting in “Underneath the Ground” are worth taking a peek at regardless. He’s very much in the process of figuring out what kind of an artist he wants to be, and whether that means sticking with the present singer/band format he’s worked with thus far or not, I think he would be wise to keep all options on the table. His is a style that doesn’t actually need a lot of assistance to sound accessible and friendly to the casual pop fan, and if getting simpler and stripping-down improves his disposition with the international audience, “Underneath the Ground” might become the tipping point for an entirely more exciting era in his solo campaign.