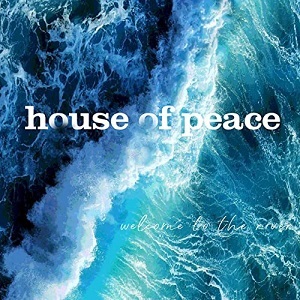 In these times of heartache and personal loss we’ve faced over the past year and a half now, we’re all looking for a cathartic release in the form of music, be it something that speaks to the harshness we’ve had to endure, but we’re also looking for something to make us rise to the challenge and to truly feel something again after a time when apathy and indifference have been so prevalent. Enter Florida-based band House of Peace and their newest single “Love is a Flame”. A song as evocative as its title suggests, the group has truly outdone themselves with this romantic send-up of the strife and rewards of love.

Beginning with a swell of strings that pick up the pace very quickly with a steady subtle but powerful drum beat, the song captures the near orchestral over the top sensation of feeling like you’re in love, something I think countless people will relate to. The song isn’t afraid to veer away from certain ideas considering that while ‘Love is a Flame” a flame isn’t just a source of warmth, but also a tool that can be used for hurt and destruction, and if that isn’t still a strong and reliable usage of fire and love as symbolic imagery, I don’t know what it. There’s a workmanlike quality to the affair with its repetitive lyrics but boasted by a dense sense of escalation that brings it to a memorable climax and a somber finale with tones that stay with you.

At under nearly 5 minutes of runtime, there’s a lot you could take away from the song and there’s plenty that you can project. That’s a part of why it’s so memorable and it doesn’t hurt that it’s been backed by such a stirring instrumental that will feel familiar to those who miss the late 00s’ to mid-10s’ sound from the like of Chris Martin and Gotye especially with its the use of more traditional orchestral sounds. It will be interesting to see how their planned electronic remix will fair and hopefully, it’s more Coldplay than the disjointed sounds of the countless radio remixes of “Somebody I used to Know”, which if you want to cringe I highly recommend looking up what those sounded like.

It’s a trip. Singer David Liscum’s voice carries a level of mythology to it, and you really do feel the weight of everything he’s singing about without feeling like it seems over the top of schmaltzy. Despite how loud and dramatic it wants to be, it never not feels honest and coming from the heart. Sometimes the lyrics can leave one wanting more since it does show some limitations on that front and with how amazing the backing track sounds, it leaves a little be desired that the lyrics can go a little more in-depth or get a little more complicated, but then again, love is an amorphous being, much like a flame itself and asking it to just be one thing is an unfair thing to ask.

The music of House of Peace been heard all over the world in partnership with the radio plugging services offered by Musik and Film Radio Promotions Division.  Learn more https://musikandfilm.com