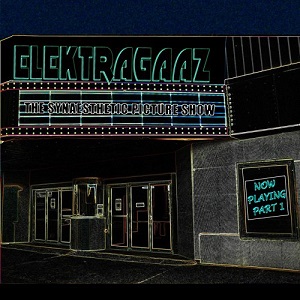 The Synaesthetic Picture Show, Now Playing Pt 1, by ElektraGaaz, is an entirely instrumental affair. To say ElektraGaaz is something of a mind bender, would be an understatement. Apparently, the group is comprised of several contributing Musicians. Many of those members, reside in the NY Metropolitan area, but not all. In fact, the “mastermind,” behind ElektraGaaz, Poppo Redband is said to be from Friesland; a Province of The Netherlands.

So many of the tracks tend to bleed into one another, and yet they also possess distinctly subtle characteristics. On “Celebrating The Singularity,” for example, the primary melody line has an almost polka like feel to it. It’s underscored by various soundscapes that form a cohesive pattern, albeit a concentric one. With titles such as the aforementioned, you get the impression of some sort of symbolism at play. But of course, this is the type of album with generally layered meanings.

Redband is said to have a “condition” that allows him to see music as well as hear it. That would certainly explain the cinematic element to the SPS album. At times you will feel as if you’re listening to the soundtrack of an 80’s action comedy, or any version of GTA, for that matter. Honestly, that correlation might be one of the most enjoyable qualities of the record. Being sync friendly is one of ElektraGaaz’s most bankable tickets to success.

“Cabin Fever” is fast paced, and has that rapid paced video game feel to it. There’s a bit of a cultural touch to the track as well, and a loop that is probably most qualified to be considered a hook. This piece flies by and can be mildly accommodating in the right context or setting. Like much of the SPS, it utilizes similar patterns and effects, to arrive at something as equally visual as musical. “Cabin Fever” is essentially a fun side bar, to the more stylized and ambitious efforts, elsewhere on the album.

It’s difficult to discern if the story behind the SPS, and ElektraGaaz itself, for that matter, is a work of fiction or not. The story somewhat overshadows the music, but the music compliments the narrative. It’s a bizarre and overly detailed recounting of how ElektraGaaz was formed, or conceived of, that actually seems to be the key to understanding it. Comparatively speaking though, without the backstory, this music would likely suffer from being a bit vapid.  By creating its own novella, ElektraGaaz gives themselves a better chance of actually being interesting.

The Synaesthetic Picture Show is either genius or a hoax. It could be the indulgent side project of a well known recording artist, or the musings of a calculated, but impulsive madman/woman. What is certain, is that this album is a ride that you’re not used to taking, and some won’t choose to take at all. Those who are willing to, though, might just find some unexpected stroke of inspiration. Rewarding those who were willing to step outside the comfort of familiarity, may just be Elektragaaz’s intention, after all.