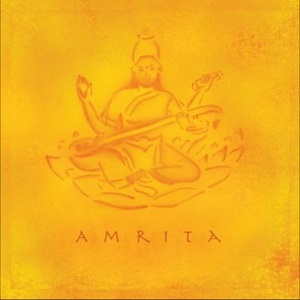 There are some emotions, and better yet, some moments that we experience in life that familiar linguistics cannot capture, no matter how poetic or profound they may be. Amrita seek to encapsulate the impossible within the realm of sonic spirituality in their self-titled 2005 LP, and although it’s an album that I would hardly describe as simple, it might be the easiest listening you’re going to get your hands these days. Comprised of spellbinding texture and idyllic tones that barely qualify as melodicism in a conventional capacity, Amrita is a treat for the senses and the soul alike – and a 42-minute meditation session no one should deprive themselves of.

String play is essential to the chills created in “Shiva Raj,” “Purti,” and the title cut in Amrita, and thanks to the high definition production quality here, we’re able to appreciate every component of the melodies it presents free of any interference, aural or otherwise. Creatively speaking, you’d be hard-pressed to find another tracklist sporting the sort of fluidity this album enjoys; to be frank, I doubt you’d find anything like it in the world of western pop, which has wholly abandoned the clandestine notes of musical omnipotence this single is built upon.

Much as the strings form the basis for every cathartic moment in the aforementioned material, I found percussion to be just as vital to “Dreaming Princess” and “For a Friend,” two of the more angular compositions to be included in this LP. The ominous “Dreaming Princess” takes much longer to find its signature swing than the more aggressive “For a Friend” does, but in both instances we’re never denied the luster of the instrumental wizardly Amrita can produce when there’s nothing to get in their way. Their ambitions were boundless here, and in that respect, you could say not much has changed about their collective persona in the past 16 years.

“Om Mani Padme Hum” features such a diverse balance of muscular melodies that one is tempted to call it the most experimental track of Amrita’s early career – however, given the abstract bend a lot of this content has, the statement will never feel completely justified regardless of how much time has gone by. It’s definitely one of my favorite recordings on the album, and while it doesn’t have an easily adaptable arrangement, I can imagine it being all the more powerful when heard live and in person.

Powerfully ethereal in tone and still as refreshing today as it was the day it first hit record store shelves all the way back in 2005, Amrita’s eponymous LP has aged like fine wine and feels critically relevant in 2021. It’s likely to be among the most effective records you’ll ever hear if consumed in the right venue with the perfect mood to guide you through the music, and if you’ve never had the chance to hear this group perform before reading this review, it’s an album I would recommend starting off with before any other in their impressive discography.