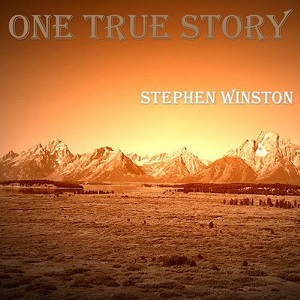 “One True Story” by Stephen Winston

One True Story is the latest release by singer/songwriter and multi-talented performer Stephen Winston. His most recent release since the low-key 2018 album “Unresolved.” It’s ironic that was the name of his last album as this album consists of many formerly unused tracks except the titular song. Starting with a potent and soft piano, “All Quiet in the Bronx” sets the stage with Winston singing about his love for the country and his condemnation of traditions now lost and finding a way to settle differences while even being self-aware to criticize himself “I must confess, I’m not any different” pierces the heart with honesty.

Keeping the piano, we switch to “Winter” as Winston sings about his disdain for Winter “It fills me with rage”, but still maintaining that he will find a way to maintain peace alongside a choir and saxophone accompaniment with a rich power that elevates the song with its sense of scope and pathos. “Lavington Hill” switches gears with electric piano and acoustic guitar, allowing for more range after a steady opening. There’s religious imagery with “he’s the chosen one” being used and references to flight making one think of angels. It doesn’t act as a stranglehold on the song or devolve it into Christian soft rock. The titular “One True Story” recorded right before Covid took a hit on the country starts with the lines “there’s a hard lesson coming and it’ll bring us to our knees.” Once again, recorded before Covid and that coincidence is just insane.

“Jami” switches things up again with some melancholy piano playing that feels like a bar emptying out into the cold winter night. With some synth and steady drums and cymbal crashes, this ballad of a loved one covers all the intricacies of confrontation and denial of life and this song has some great punctuated instrumental rhythms while Winston croons the perspective of a mother saying that the titular Jami will “Be all right” before turning away again. “Behold This Sturdy Bed”, “Another Side to the Story” offer contrasts to one another, ‘Bed’ offering imagery of a man suffering from demons that won’t leave him, once again Winston even years ago displaying his Mastercraft usage of lyrics and the chorus acting as Winston’s own sturdy bed for the song itself. ‘Story’ leans into the darkness “as usual there’s a darker side, there’s more than meets the eyes” and even says “there’s always an undertone” which is fitting because the same could be said for his own music.

“Outside the Ring” gets a little more uptempo with its drums and jaunty piano while Winston and a female backing vocal state that “hope is a lie to yourself” and it’s a challenge to passive action while providing no answers to how to handle it, showing Winston is not here to make you agree with him, he’s just challenging you to think. The ironically titled “Noise” is one of the softest songs on the track with Maraca, acoustic guitar, and offers the idea to slow down and enjoy the view. The whole album feels like a travelogue of ideas and the execution is seamless. The past is bright and the future looks brighter for the talents of Winston.