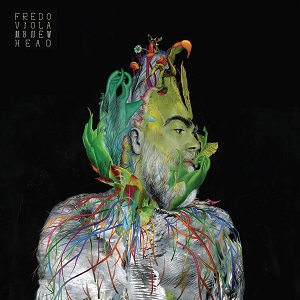 Concept records admittedly aren’t everyone’s cup of tea; that said, some of these epic recordings are simply too culturally, artistically, and spiritually relevant for even the most discriminating of critics to ignore, and Fredo Viola’s My New Head definitely fits this description. My New Head dabbles in more than a few eccentricities and throws the rulebook into the wind right out of the gate with a pair of tracks in “Demolition” and “Pine Birds” that immediately inform listeners of the operatic charisma to come, but while I’ve always been picky about this kind of an LP, I was hooked from the first time I heard this indulgent intro.

Conventionality intersects with cerebral ambitiousness in “Waiting For Seth” and “Stars and Rainbows,” but never does it feel like the dominant component in any composition on My New Head. “Edwin Vargas” has a regal sensibility that makes it feel like the automatic radio spin in this tracklist, and yet its eclecticism is what defines the best moments the song has to offer us. Only a versatile player can make all of the oddities in this piece work and flow together seamlessly, and I think that’s why so many critics are rewarding Viola with affection for his work here.

Viola’s visual arts background bleeds into the experimental “Kick the Stick,” “In My Mouth” and a bonus cover of “Downtown” not included with the main album, lending some increased physicality to the music that simply would not have been in this juncture of his career otherwise. He looks at this material in an entirely different way than anyone else would have, and if that isn’t the very definition of what it means to have your own style, I really don’t know what is. My New Head is, as a whole, an assertion of independence from this perspective (and a very attractive one, I might add).

Half of the experience we’re gifted in this record is born of the backdrop and its relationship with the lyrics Viola sings to us, and in “Pine Birds” and “Clouded Mirror,” it becomes impossible to question whether or not his is a style that isn’t dependent on imagistic lyricism to shine. He has more in common with the vague psychedelia of a bygone beat generation than he does anyone associated with the modern alternative pop movement, and I really believe it is this influence that gives him a step above everyone else in his scene.

My New Head is unlike any album you’re going to hear in 2021, and though it doesn’t have the bells and whistles you might find standard in a lot of the Billboard-topping hits to debut on the mainstream end of modern music this year, it doesn’t need them – it’s commanding enough on its own. Fredo Viola has become the sort of indie artist who has his own category in the sprawling lexicon of alternative subgenres, and with his acerbic stylization of My New Head mixed with the reputation for perfection he already had before this release, his collective profile is almost guaranteed to see a big boost in the press this summer.

User Rating: Be the first one !
Share
Previous “Dance Tonight” by Ronnue (feat. Lisa G. Allen)
Next “One True Story” by Stephen Winston