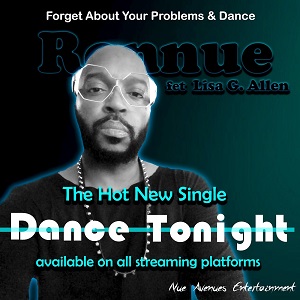 Ronnue has been in the press a lot over the past two years, and if you’ve been wondering why, his new single with Lisa G. Allen – “Dance Tonight” – might give you an idea what all of the fuss has been about. Indie artists in the Seattle scene haven’t been as credible in the past ten years as those we who came a generation before them; however, with his breakout in 2019, Ronnue has been attracting considerable attention to his output through an array of diverse, evolutionary moments critics have rightly regarded as profound. “Dance Tonight” builds on what he’s already started, and more importantly shows us who he is in a proper collaborative piece.

The swing of the percussion here shows off some serious growth within his lyricism, not because of how the beats from his verses, but instead because of how he’s integrated the cadence of his delivery into that of the natural groove. Everything comes together and feels like a collective hurricane when Ronnue needs it to, and while I thought he was going to get to this point eventually, I couldn’t have guessed it would be so soon in his blossoming career.

The instrumental and radio mixes of “Dance Tonight” are more elegant than previous stabs at the same concepts have been, and though the acapella and dance mixes are a little more menacing and DIY, I think this was deliberate on the part of producers. Ronnue doesn’t approve something for release unless it’s captured the essence of his artistry – this much has been obvious in his past releases – and I don’t think he’s making an exception for this single at all. He’s got an ear for the subtleties other players ignore in their own work, which is why he’s reached the top as quickly as he has.

I will say that “Dance Tonight” in its radio and dance formats do not make as much use of Ronnue’s vocal depth as I would like, and this is backed up substantially by the chills produced via the acapella cut of the song. He’s got such a velvety melodic whim to his singing, and had that gotten a little more of the spotlight in the radio and dance mixes, I think they would have been more equipped to compete with the mainstream content hitting record store shelves in the next few months. All the same though, this is still very compelling material.

“Dance Tonight” brings us another instance of Ronnue evolving before the eyes and ears of listeners around the globe, and if you haven’t already given it a spin I think this May would be a really good time to do so. The grooves are big while the harmonies are boldly colorful and worthy of a second analysis, and although Ronnue has yet to disappoint me with anything he’s done inside of a recording studio so far, I think this piece has made me realize that I shouldn’t expect anything less than ongoing experimentalism from his sound. That’s what’s got him this far, and it’s likely going to bring him all the way to the majors.