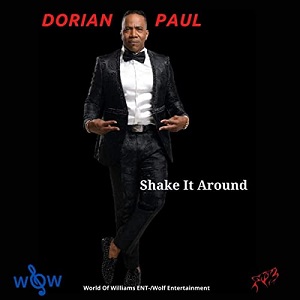 “Shake It Around” (SINGLE) by Dorian Paul

A lot of artists draw us into a lead single with a big, theatrical introduction comprised of elements typically found more in a motion picture than they ever are in a pop recording, but Dorian Paul is not one of these artists. He’s an old school player, a purist if you will, and he doesn’t even attempt to waste our time with any sort of filler in the new single to bear his name in the byline, “Shake It Around.” Strutting forth with a percussive prowess that could only ever be eclipsed by the smooth delivery he gives every verse he sings, “Shake It Around” is classic Dorian Paul and a rhythm addict’s dream come true; that said, it’s also one of the more aesthetically pleasing releases I’ve had the chance to review this year.

The lyrics in this single aren’t as gospel-heavy as some of Paul’s other music has been, but the sense of religious commitment is still here if you listen hard enough. The very size of the grooving in the instrumentation is an ode to the powerhouse Black gospel experience so many of us grew up with and hold dear to this day, but here it’s never overstated in the fashion so many younger players have utilized it recently. There’s more complexity to this piece than would ever allow for recklessness, and in keeping with the tradition of his influences, Paul sounds just as profound in his performance of “Shake It Around” as some of the greatest heavyweights of all time did in their own work.

I really appreciate how simplistic the instrumental end of this song is, and had it been overly complicated with a lot of bells and whistles, I’m not convinced that it would have the lean and mean punch that it does in this instance. Dorian Paul is someone who strikes me as an efficiency guy, both in and outside of the studio, and while he can’t be accused of celebrating minimalism the same way a lot of the indie rock bands I’ve been reviewing in 2021 have, he’s definitely rejecting the very notion of bringing excesses into his music that just do not belong there to begin with. He knows who he is and why his material is so appealing, and he isn’t changing a thing about his winning recipe in this track.

Despite having more miles on the odometer than some of the competition, there’s still a lot of bite in Dorian Paul’s sound, and it’s led to “Shake It Around” feeling like one of the most youthful, unapologetically free-spirited songs of its kind scoring a lot of points with critics like myself this year. “Shake It Around” is currently out everywhere quality indie music is sold and streamed, and if you haven’t had the chance to sit down with it – or any of the other iconic, gospel-influenced songs that Paul has released to date – this spring might be the right time to give it a go. This is music made for upbeat spring afternoons spent in the sunshine, and it’s bound to get a big reaction out of you on the spot.

The music of Dorian Paul has been heard all over the world in partnership with the radio plugging services offered by Musik and Film Radio Promotions Division.  Learn more https://musikandfilm.com