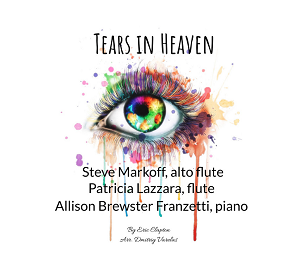 “Tears In Heaven” by Eric Clapton is a beloved song with a tragic story attached; a song written to mourn the loss of the rockstar’s 4-year old son. Recorded originally in 1991 and released officially in 1992, the song topped charts and held everyone’s hearts captive for years. This new rendition of “Tears In Rain” by Steve Markoff, Patricia Lazzara, and Allison Brewster Franzetti is just as soulful and tear-jerking as the original and they did it without any vocals. Steve Markoff and Patricia Lazzara masterfully play their flutes, notes wafting through the air as light as a bird, while Allison Brewster Franzetti’s warm piano keeps the song grounded. Together the trio has reproduced a version of their song that is respectful of the original but wholly their own.

Patricia Lazzara, a concert flutist, is a renowned soloist, orchestral, and chamber musician. She is a three-time winner of the Artists International Competition and has performed at Carnegie Hall several times. Her expansive discography includes nine albums with different ensembles, including her most recent solo release, “Radiance.”(2018) On “Tears In Heaven,” Lazzara gives a formidable performance, soaring and achingly beautiful. She really captures the essence of the lyrics, without singing a single word, tapping into indescribable empathy.

Steve Markoff, who plays the alto-flute, is known for his warm interpretive style which has been gaining notice the past few years. He didn’t pick up his flute until the age of 56, driven by a passion to learn the instrument. He began as a student of Ms. Lazzara, who recognized his immense talent. He co-produced and performed on Patricia Lazzara’s most recent solo album “Radiance”. Together with Lazzara, they released “Timeless” in November 2019 and “Romances In Blue” in March 2021, both to rave reviews. Markoff delivers a rich earthy dose of soul to “Tears In Rain.” His playing is warm and fuzzy, like a good sweater.

Finishing off the trio on piano is Allison Brewster Franzetti. She is the winner of both the 2014 and 2018 Latin Grammy Nominee for Best Classical Album and 2008 Grammy Nominee for Best Instrumental Soloist without Orchestra. Before working with Steve Markoff and Patricia Lazzara, Ms. Brewster Franzetti’s last full-length album had been “Luminosa,” created with her husband, the composer/conductor Carlos Franzetti, and the City of Prague Philharmonic Orchestra, released in 2017. In “Tears In Heaven,” Brewster Franzetti creates an excellent current of chords, a strong river pulling you through the song. Her playing is exuberant and yet still solemn and respectful, translating the message of the song wonderfully.

Together these three powerhouses of music have come together to create something beautiful and special. If you’re looking for something new or relaxing to listen to, I suggest you put on their version of “Tears In Heaven” and close your eyes. Steve Markoff, Patricia Lazzara, and Allison Brewster Franzetti have tapped into the soul of the song and laid it out for anyone who needs a little healing. If “Tears In Heaven” gets you hooked on their sound (and it probably will) you can find their other two albums “Timeless” and “Romances In Blue” on Spotify. Keep an eye out for their newest album set to drop in 2022, said to be chock full of pop and rock hits.

The music of Steve Markoff & Patricia Lazzara has been heard all over the world in partnership with the radio plugging services offered by Musik and Film Radio Promotions Division.  Learn more https://musikandfilm.com