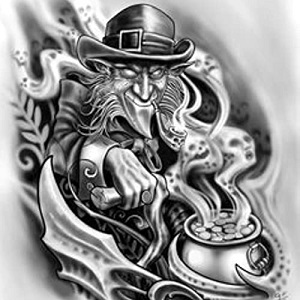 Vic Diggie is one of those artists that instantly gets your attention, for a variety of reasons. His gruff, throaty vocal style is reminiscent of the late DMX, and his look is somewhat similar as well. Based out of New York, Vic Diggie began his career in the mecca of all starting points. His current single, “Clover And A Leprechaun” is a hard R- Rated, retrospect on relationships, that “never had closure.” We’re led to believe that the track is autobiographical, mainly due to Diggie’s impassioned delivery.

Currently, Vic Diggie is signed to NY based label, Brittano Records. From all appearances, Vic Diggie is in the genesis of his Rap Career. His confidence, laser focus, and full intent on “Clover And A Leprechaun,” make it seem as though he has more than paid his dues. Diggie has an intense charisma that emanates from the speakers, as he expounds upon some very adult themes. He comes across as brash and uncensored at times, and sensitive and even romantic, at others.

Diggie isn’t necessarily, unlike anything we have ever heard, but he also doesn’t sound like someone we hear often. It’s presumptuous to say that he was influenced by DMX, but it’s possible, of course. On “Clover And A Leprechaun,” Diggies seems so preoccupied with the content, that his delivery comes across as secondary. The lyrics, read like text messages between himself and his partner, recited, verbatim. To say he gets extremely personal and graphic, would be a understatement.

All good things must come to an end/so I end it with you/and begin with another woman. The more you listen to “Clover And A Leprechaun”, the more it plays out like a riveting storyline from a reality show, you can’t look away from. Diggie is 150% invested in his performance, that once again, doesn’t seem like a performance at all. In the current climate of what constitutes misogyny and what doesn’t, he walks a proverbial tightrope that will possibly go a long way in mending social dynamics. His relationship with the women in his life is complex, as he desperately attempts to understand why he doesn’t seem to receive the same effort he gives.

Musically speaking, “Clover And A Leprechaun,” hits all the right notes, for fans of the genre. The track is mixed well, although it wouldn’t have hurt to bring up Diggie’s vocals, a bit. While the song may not be quite, “ready for radio,” it’s close enough to make a good impression of Diggie’s style and talent. He has such a signature voice, that he really needs to be out front in the mix, to fully capitalize on that. Perhaps a remastering of “Clover And A Leprechaun,” would be a beneficial, as the song itself is layered and arranged, well enough.

While this track is not family friendly art/entertainment, it is competent and ebullient. Diggie holds absolutely nothing back, and shoots straight from the hip, even if some might advise, he tone it back a bit. This is a portrait of the artist himself, at his most primitive, and in some ways, emotionally vulnerable. Diggie will probably never be as irreverent at any point in his career, than he is now. He’s going to create his own luck, clover or not.

The music of Vic Diggie has been heard all over the world in partnership with the radio plugging services offered by Musik and Film Radio Promotions Division.  Learn more https://musikandfilm.com