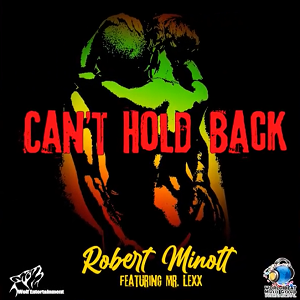 Phenomenal Jamaican singer/songwriter and producer Robert Minott has struck gold with his recent 2021 release “Can’t Hold Back”. The kind of love song we need right now during these troubling time, the super busy icon in the making has certainly kept busy having put multiple musical projects out over the course of many decades now, and has even been lucky enough to top charts in Jamaica with his 2011 single “Right Man Fi Yuh”.

To say that he has a clear grasp on his cultural musical footprint would be redundant as even outside of his genre that’s in his blood (his uncle having been Sugar Minott), Robert is a fantastic musician in his own right, not held down by nepotism or his family legacy. His voice and vision are distinct and it’s made very clear on this showcase of a track. Showing off not just his fantastic singing voice that has these deep rich layers that will keep you coming back to listen not just because of how catchy it is, but to also pick up on the subtleties that Minott throws into his performance, but “Can’t Hold Back” is another winning feat for Robert as a producer. He knows exactly what to emphasize and when especially with the fantastic door-busting opening that recalls the vocal work of Shaggy (someone who Robert has actually had the chance to work with).

A lot of Jamaican music to the untrained ear might all seem very similar with its ideas lyrically being about peace and love, but so much of the nuance rests in the performative abilities of the singer, and just what an impact the music can have on an audience. The song might not be “complex” in a traditional sense, but it comes from complex emotions that Robert channels into the song, primarily told from his perspective as a budding love bird who wants someone to know that he only has feelings for him, will protect and cherish her, and only wishes that she feels the same way. After a year that saw a spike in breakups and divorces, this is the kind of song any single person or couple can listen to and remember why they fell in love, to begin with. I would really kill to hear this song live and to see a crowd respond to it. It’s so easily danceable and feels like one of those songs that should have existed forever now. Minott has also made waves on the New York and South Florida Reggae charts and it’s easy to see why.

It’s a song that feels like a comfort food slice of happiness. I’m dying to know where Robert will go from here and what other topics he’ll give his own personal spin on. This feels in a lot of ways like the prologue to his other single that dropped in 2021 “Let’s Chill” which is taken as a narrative whole, sees what comes from the bubbling love you feel and how you’ll be satisfied and content after, which is how many will feel after listening to this track.

The music of Robert Minott has been heard all over the world in partnership with the radio plugging services offered by Musik and Film Radio Promotions Division.  Learn more https://musikandfilm.com