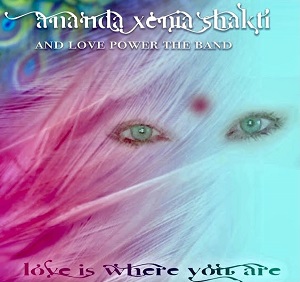 While it’s true that anyone can take a slew of exotic tones and sew them together for a proper single, it takes something a lot more intricate to turn them into a hit, which is what Ananda Xenia Shakti and Love Power the Band do so epically in their new record Love Is Where You Are this spring. Opposing the minimalist movement on all fronts, Love Is Where You Are is a liberally-stylized homage to the glamor pop and psychedelic-accented melodicism of yesteryear, but it ironically has moments of feeling a lot more forward-thinking than some of the other music I’ve been hearing out of this group’s scene lately.

The production style here favors the cohesion of the complete band as opposed to the vocal Shakti is putting up in these tracks, but this doesn’t do much to stop her voice from being one of the more enamoring components of any song here. “Mahisasuramardini” and the title track in Love Is Where You Are have got some particularly stunning leads that could have taken over the narrative of the instrumentation in this EP seamlessly, but there’s more we’re to be exploring in this band’s sound than the velvety-voiced front woman’s delivery alone.

I’ve cherry-picked this tracklist and shuffled it a couple of different ways, but the bottom line is pretty simple in my opinion – if you aren’t listening to Love Is Where You Are as a complete piece, you aren’t really listening to Ananda Xenia Shakti and Love Power the Band. This is a long-form letter to the listener, and it comes together brick by sonic brick if you play the songs out in the order they were originally intended to be heard, which makes this by far one of the more conceptual and endearing progressive works I’ve listened to since the start of 2022.

The physicality of the music is curtailed only by the brooding tonal presence of the strings in “Devi” and “I Am Love,” but I think this was absolutely necessary to keep the instruments from piling onto the vocal and eliminating the bit of special tension it enjoys in the big picture here. The mix is intentionally a little cluttered in spots to give us a taste of the overwhelming live potential that these players are contending with, but it doesn’t cloud over any of the detail that makes this record such a fun listen from beginning to end.

If you didn’t know anything about Ananda Xenia Shakti and Love Power the Band before listening to Love Is Where You Are, much like myself, then you’re probably going to step away from these five songs feeling a little taken aback by what you’ve just heard. This EP brings together a lot of different aesthetical components, but chief among them is an old guard pop experimentation that these musicians embrace like nobody’s business – and with incredible results to boast. I doubt this is the end of their odyssey, but instead only the beginning of something really beautiful.