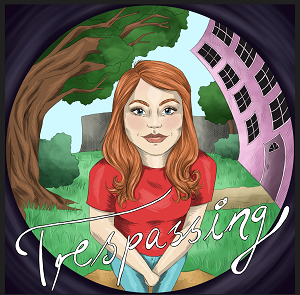 A conceptual foundation can be found at the heart of every Morten Nygaard track, and it’s in this way that his new single picks up where his previous releases left off. Although there’s a lot to be said about the surface-level aesthetics this song sports so flawlessly, there’s more to be explored within the soul of the narrative, especially in the framework it’s presented in here. Rather than trying to lay everything on the line with his lyricism, Nygaard is spreading out the expressive element in this track to encompass the harmonies as much as it would the verses on their own, and to me, he’s setting himself up for a lot more mainstream exposure than he initially did in his first pair of singles.

Morten Nygaard is rather hesitant with his voice in moments where a lot of his peers would be going out of their way to extoll an indulgent musicality, but I don’t think it’s hurting him in the least in “Trespassing.” There’s an argument to be made that his willingness to embrace his own fragility is one of the more inspired points of emphasis in the structure of this piece, and had he not been so quick to be as relaxed with the audience as he is, I don’t believe we would be able to appreciate his depth as a singer and songwriter in this performance the way we’re able to in this instance. He’s thoughtful, and it’s something that immediately makes his work stand out to me.

The restraint in this singer’s voice matches the tone of the lyrical substance in “Trespassing” all too elegantly, and I get the impression from the overall setup here that we’re supposed to look towards the music to tell us a complete story more than we are any of the linguistics in this recording. I’m not in any way saying that Nygaard is mailing these verses in, but he’s undeniably straddling the fabric of the instrumentation with more gusto than he’s executing any of the lyrics here. He wants to use the full spectrum of color available to him in this performance to get a point across to us, and for this reason, I think he’s going to get an incredible amount of accolades.

If you were among the listeners who believed that Morten Nygaard had it in him to go bigger and better with this new single, you’re going to be very taken with what he’s put together for us in the smashing “Trespassing.” He’s got a sense of self-control that can be exploited even more so than it has been thus far, but for what I was hoping he would accomplish with this track, he’s exceeding my expectations and then some. There’s more to find out about this player – his thoughts, his emotions, what really drives him – but he isn’t putting all of his cards on the table just yet. This is quite the teaser, and reason enough to rejoin him for a future performance.