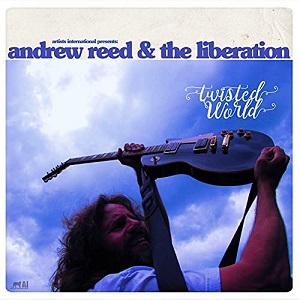 A steady beat and some warm melodies don’t mean much unless you’ve got a poetic narrative sturdy enough to fit within the context such entities can create in a single like “Twisted World” this autumn, and to this end, Andrew Reed & The Liberation aren’t exactly playing fast and loose with their career ear. Instead, I think it’s clear how important being a rock n’ roll band is to these players is how hard they get after the hook in “Twisted World,” which is pushed forward as much by the energy of its performers as it is the emotionality of its story – and moreover, how the point is reached from behind the microphone in this single.

Though I don’t think there’s any room in the master mix for additional instrumentation, there’s no crowding these guitars at all (the opposite, truth be told). If I didn’t know better, I would have assumed that Reed spent a lot longer hammering out the structure of this song than he did just because of how well constructed everything in this performance is. There’s not a doubt in my mind that these musicians have more passion for the final product than almost anyone else in their insular scene does at the moment, and better yet, what they’re doing for the audience in this release is so far removed from the synthetic in modern rock that you can’t accuse them of winning over halfhearted buzz nor following someone else’s path to fame.

Andrew Reed’s lead vocal is probably my favorite part of this track from a critical perspective, but I also think there’s something special about the way he integrates his voice with the harmony of the instrumentation on its own. Technique can yield as bold a response from critics and fans as temperament tends to, and I think “Twisted World” reminds us of this without fail in more ways than one. While I don’t want to see a lack of substance in what he’s saying in the verses here, I want this guy to stick with gut-feeling words that embrace the unspoken emotional presence of lyricism rather than the outright blunt angle that so many other players have tried to use in the last few years.

In the last two years, we’ve seen alternative rock struggle to stay afloat on the indie level with regards to the live music community, but Andrew Reed & The Liberation are doing their best to keep an entire scene alive with the creation of bomb material like this. “Twisted World” has a lot of aesthetical roots in the classic indie rock that brought us iconic songs like “Madonna of the Wasps” once upon a time, but if you think that its best feature has anything to do with being retro, you’re not going to know what hit you when you listen to it all the way through. There’s some really interesting alternative music coming out of every corner of the underground right now, and this is some of the best I’ve listened to all season long.

Share
Previous Lavendine “Here to You” (SINGLE/VIDEO)
Next JOEY STUCKEY