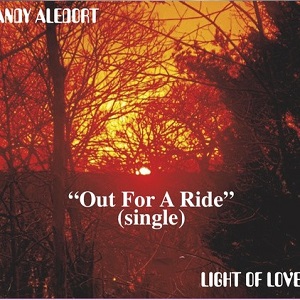 Andy Aledort “Out for a Ride” (SINGLE)

Strings and the raw charisma they can generate against a blank space background – this is all Andy Aledort needs to light the wick on his new single “Out for a Ride,” a song that caught my attention for the first time this past January. Initially, this track has all the fundamental makings of a blues song, but it doesn’t take very long for us to figure out that there’s as much of a country bend to the fretwork here as there is Delta-style angst born out of every harmony. Aledort doesn’t mind strutting a bit in this performance, and if I had the kind of musical, all-American chops that he does in the tempting “Out for a Ride,” so would I.

The lyrical narrative here is one you could consider multi-interpretive, and I don’t find it to be as striking nor as direct as what the music is saying on its own. This material is constructed from legit blue-collar aesthetics, but it’s not translating like amateur hour at the local pub by any means – in fact, quite the contrary. There’s so much homespun energy provoking the passion in Aledort’s play, and yet it’s his relationship with the other instruments around him and not his verses that are telling us the most about who he is and the sound he wants to make his own. He’s not a self-righteous player by any measurement but instead one who wants us to experience his work through the majesty of the music over poetic subtext alone.

This material blends the best of what the blues and country genres have to offer when they’re being presented without any of the fluff that mainstream artists tend to add just for the sake of sounding radio-friendly; ironically enough, I think “Out for a Ride” is already set to warm up the alternative FM scene as-is. Aledort is giving us a lot of heart at the microphone, but it’s the ebbtide of the instruments that shapes the moodiness and the aesthetical appeal of this single, which makes it a decent listen for fans of both the hard charged blues of the American south and the country tones of a more western region, meeting under the umbrella of rebellious folk-rock right in the middle.

A pastoral offering that isn’t lacking in muscle for anything, I was really surprised to be as turned on by “Out for a Ride” as I was last month, and I can see this being the case with a lot of the music Andy Aledort produces as a solo artist. He’s been experimenting with the limits of country, rock, and blues for the better part of a long career, but he doesn’t put up a babe in the woods routine for the performance he’s giving in these sessions. “Out for a Ride” sounds more like a victory lap within the context of his career, and something that only verifies his ongoing reliability and credibility as a songwriter, performer, and steward of American songcraft.

The music of Andy Aledort has been heard all over the world in partnership with the radio plugging services offered by Musik and Film Radio Promotions Division.  Learn more https://musikandfilm.com