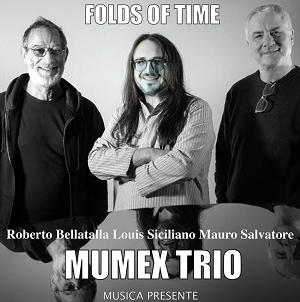 As an art form, jazz is best described as brilliantly organized chaos, dependent on the more calculated players in music to really do its core aesthetics justice. In this regard, the new album Folds of Time from Mumex Trio is certainly one of the more complete jazz listens I’ve had the opportunity to review in the past couple of months, if not the collective 2021-2022 calendar. Rather than relying on conventionalities to express emotions that have no true linguistic counterparts, Mumex Trio attack the narrative with instrumental virtuosity and a madman’s sense of melodicism in tracks like “Traveling with Wayne” and the equally monstrous “The Legend of Mansa,” which together comprise over half of the album’s running time. This is heavyweight content, and it’s presented with an acerbic tone all too uncommon on either side of the dial today.

The percussion is truly a mood-shaper in the midsection of “Traveling with Wayne,” as well as the dashing “La Roue De La Fortune,” but at no point does the rhythm of any particular song here sound defined solely by the beat of a drum. Truth be told, it’s a little difficult to describe the anti-groove you’ll hear in a piece like “La Roue De La Fortune,” because no two instruments seem to be following the same formula – this is unquestionably a track that lives and dies by the absurd notion of normalcy and predictability, which is exactly what I want out of a full-bodied jazz performance of any length.

I appreciate the pulse of the bassline in the title track and “The Legend of Mansa,” especially with regards to how it balances muscularity with a righteous execution. You can tell that the players here have a lot of experience between them even without getting into their backgrounds; from one piece to the next, there’s scarcely a moment in which their individual deliveries aren’t producing a collective wallop that both feels and sounds like something you’d normally experience in an intimate club setting exclusively. This record really packs in a lot of vitality for being a studio piece, which is something plenty of artists have tried to accomplish in the past two years – though few have had the success Mumex Trio is in this release.

A spellbinding effort for jazz fans both new and old the same, I highly recommend giving Folds of Time a listen this winter season as to enjoy what could be one of the best independent records to emerge from this genre in a long time. Folds of Time sees Mumex Trio contending with some of the bigger names in jazz through a cultured, worldly concept of experimentalism that has the potential to create some really smashing works appealing to listeners normally too discriminating to appreciate hybridity. I’m very impressed with this album, having never listened to Mumex Trio before, and if it’s representative of their personalities as well as their skillsets, theirs will be a discography I’ll be forced to pay some serious attention to.

User Rating: Be the first one !
Share
Previous Andy Aledort “Out for a Ride” (SINGLE)
Next Mary Broadcast “Panic” (EP)