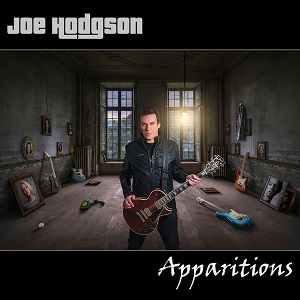 Apparitions – By Joe Hodgson, is a 15 cut, full-length monster of an album and that is only just scratching the surface to put it lightly. The Northern Irish guitarist is a blues, rock and jazz fusion wonder influenced by the likes of Rory Gallagher and Gary Moore, with his own modern touch that keeps up with the virtuoso chops of the day as well. On this album he shows an amazing skill set for both songwriting and playing, and the album also includes Vinzenz Benjamin on bass (Go West, Holly Johnson, Paul Young), Max Saidi on Drums (Will Young, Shane Filan), and Nick Gilmore on keyboards (Odyssey).

I was instantly blown away from front to back of this solid collection of guitar instrumentals that play on the level of every modern virtuoso I can think of. In fact, without getting lost in the mix he fits fright in with the Satriani’s and the Vai’s of the world, heard of Joe Hodgson or not. It’s hard for me to not stand up and pay immediate attention to anything that opens with my favorite piece of music. “Cantata 147 / Fly Your Flag” begins with “Jesu Joy Of Man’s Desiring” and even comes back at the and closes with it. In between you get a full menu of Hodgson.

After that I was on board for the duration of this amazing record which plays on loop for days, it’s really that good and makes me kick myself for not having heard more by this artist, but Ireland is a world away so there’s one reason to help expose this to the masses. “Serena Sonata” keeps the business going, as do all tracks which practically fly right by and another spin is all it takes to continue pleasing. It’s very jazzy, but there’s also plenty of funk in this track to round it off.

“The Last Breath” is another ballad, but this one more esoteric than the previous ballad, with more layers and an overall medicinally soothing quality. But the quality never lets up anywhere on Apparitions, with “Long Hard Look” being one of the most straight forward blues tracks on offer, and it holds down the fort with the best of ‘em. Then there is the amazing “Disrupter” with its outstanding bombardment of fusion, it’s only of the only tracks begging for some vocals over it. “10 Feet From Chaos” and the rest are exactly that in the overall assortment of hot material on Apparitions, an album very difficult to flaw at any rate.

User Rating: Be the first one !
Share
Previous “Christmas on Cellblock 9” from See Your Shadow Songwriting
Next Fitzsimon and Brogan – This Wicked Pantomime (LP)