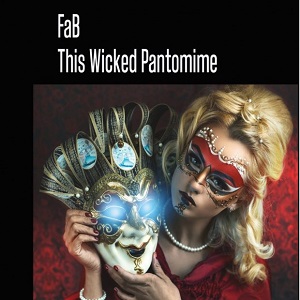 Emerging from the silence with a galloping groove you’d have to be crazy to dismiss as anything other than addictive, Fitzsimon and Brogan’s “Dancing Partner” opens up the new album This Wicked Pantomime on a high note to say the least. Striking together red-hot riffing straight out of the garage with a fundamental pop songwriting concept, “Dancing Partner” is a simple but sizzling way to get the tracklist started, but next to “Lost Love of the Pixie Girl” and “Desolate Angel,” it’s not any greater a sonic beast. With tunes like these and the tempered “The Sheltering Sky” kicking this fifth studio LP into place, there’s no mistaking what the theme of This Wicked Pantomime is – poetry and punishing weight, often served in equal measure.

“A Toy for Juliette” has the bones of a proto grunge ballad, but it lacks the eccentricity of the melody in “Elsie’s Last Stand” that made me instantly connect with the latter more than I did the former. “Elsie’s Last Stand” is a song that manipulates us into docility with its rhythm – which brilliantly replicates a whirlpool effect – only to turn us over to the rock n’ roll dreaminess of “A Bullet for Cinderella,” a composition I would call the best track on the album. Focus is everything in the indie rock genre, and if this is still to be believed in 2020, there should be no arguing whether or not This Wicked Pantomime checks all the right boxes to qualify as a meticulously melodic (and brainily-constructed) LP.

“Seven Seconds of Summer” digs from a folkier well than the songs it sits beside in the tracklist do, but I suppose placing it next to the dark “The Tears of Scarlet Murder” didn’t do it any favors. Don’t get me wrong; nothing here overshadows anything else, but there are occasions in which the rollercoaster like transitions from one performance to the next can start to feel purposefully incendiary. “Ghost at the Feasts” changes gears again for a haunting layered harmony that chucks us out of the frying pan and into the fire for the scorching “Pretty Blue Gun,” another one of my favorite songs on This Wicked Pantomime. The short and sweet title track follows with a breather for the listeners ahead of another suffocating song in “Persuasion,” but by now, the unpredictability of this listening experience has become the biggest point of consistency.

This Wicked Pantomime crosses the finish line with a track called “Distorted Mirror” that instantly made me think of Plans-era Ben Gibbard, though in this case the music is a bit more important to the narrative (particularly with regard to how it influences the tone of the lyrics). I came into this review with some high expectations for what I was going to hear out of Fitzsimon and Brogan’s fifth outing together, and after listening to this LP, I can say they’re hitting the mark and then some in 2020. This is an evolved sound, but if you loved what they did for the first four albums to bear their moniker, you won’t find yourself lost here at all.