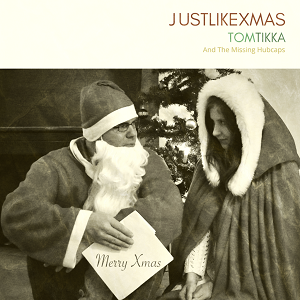 The holiday season has a way of creeping up on all of us. For many, it can also be a sad time, a sorrowful time reminding them of happier times and what might have been. Capturing both the joy and the sorrow in his Beatle-esque tune, “Just Like Xmas (Love Is War)”, Tom Tikka & The Missing Hubcaps deliver an emotionally triggering song wrapped just for the times. The dreamy electronic piano music bed, and Tikka’s melodic vocals create a cozy, endearing emotional connection. “Just Like Xmas (Love Is War)” is a two-sided coin that makes holiday sense.

I was curious as to why Tikka titled the song with ‘Xmas’ rather than ‘Christmas’ and I believe he did so because he wrote during a trying time in his life. It was the first December 25th following his divorce and he had to spend the holiday alone and without his kids. That would certainly put a big fat ‘ol X in the Eggnog. He wrote the song after taking a walk, and encountered simple joys along the way. The journey is transportive. Another lonely heartache…I’ve come to the conclusion Santa ain’t real, Tikka sings. His voice is mellow, and sounds slightly like Jim Croce or John Denver. I was trying to think of another comparison and arrived at John Lennon when low and behold, he actually sang the lyrical line listen to John Lennon and Plastic Yoko Ono Band. For a second there, I thought he was Google or Facebook and reading my mind. I only say that in jest, of course. Tikka really is a unique songwriter. I like the way he sort of bridges together his inner thoughts and gives them a unique melody. Even if I hadn’t read his notes that he wrote this song after going for a walk, I could imagine the growth and evolution in the story line.

The backing music moves along just as his emotional journey flows. The opening is like a snowfall, you look out at fresh snow and feel so many possibilities. But there is a sense of being compressed, that the world is on his shoulders. About halfway in the song, a collision of timpani drums emerges. So unexpected! Closer to the song’s end, a symphony of horns emerges. This transition reminded me a lot of a “A Day In The Life” from The Beatles. The church bells sing, the children sing… I wish that Christmas could be on the whole year round, Tikka sings at the song’s end. He wraps up the song, giving the listener a bit more sentimentality and a bit more love to carry them.

There is hope and there is a star shining in the sky. We just have to look for these things that are all around all year. Tikka might not start out cheery and maybe a bit of a curmudgeonly philosopher, but like every great holiday tale, he’s learned that love and kindness is indeed in all of us. We just have to spread it.