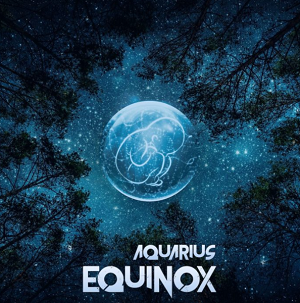 Equal parts metallic melodies and raging rhythm, the latter being as strong as a hurricane-force wind in spots, comprises the opening cut in Aquarius’ Equinox, but don’t be fooled by the onslaught of intensity – there’s as much a sense of delicate decadence in this EP as there is physicality in “Gone Away.” Between the waves of testosterone lies a feminine lead vocal as crisp as they come, bewitching us with a melody that is nothing short of heavenly and perfectly timed with the ebbtide of the percussion. Nothing is holding Aquarius back here; they’re in their element, and undeniably giving us as much of a self-portrait as can be mustered from within the constrictive walls of a recording studio.

The star single in Equinox, “Enemies I Called My Brothers,” has the most moving guitar play of any song on the EP, but its magnificent singer is again such a focal point in the middle of the discord that it’s easy to mistake the violence around her for a seamless, albeit noisy, harmony. There is no filler nor blistering virtuosities inserted in the place of heartfelt poetry in this record; I feel like we’re getting as close to the live product as Aquarius can provide, though I will say that songs like “Enemies I Called My Brothers” hints at untold improv only possible when a band is being fueled by the passion of the audience. I’d like to find out for myself, and that isn’t always the case when listening to a rookie extended play as progressive as this one is.

I don’t think you need to be a prog enthusiast to really dig the concept behind songs like “Gone Away” and “God” especially, but those who are will probably regard both tracks as masterful examples of the genre at its most efficient. As much as Aquarius embrace indulgences that would normally be shunned by the average alternative rock act, they aren’t all that big on bombast – even when they’re trying to produce something theatrical and emotive like the provocative “God.” The spoken word in this piece is chilling, but it’s so straightforward that it feels less like a sample than it does an integral stepping stone between the lyrical stories in “Enemies I Called My Brothers” and “Coming Home,” the final song on the EP.

In “Coming Home,” a drifting piano carries us across the finish line in a ghostly haze of vocals and keys ascending into the heavens above, but I’m inclined to interpret this conclusion as more of a cliffhanger than a true ending chapter. There’s still a lot of emotionality that Aquarius is leaving on the table, and if they’re able to tie up the loose ends in a proper LP, I think they are going to solidify themselves as important up-and-comers in a progressive rock era that needs more brazen heroes at the helm. Aquarius impresses me quite a bit in Equinox, and I’ll be eagerly awaiting their next dispatch – whether it comes from the studio or a world tour.