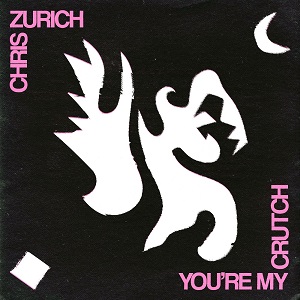 Harmony is the cornerstone of every hit pop single, but in the case of the new track “You’re My Crutch” from burgeoning singer/songwriter Chris Zurich, it’s at the foundation of every creative move he makes inside of the song’s run time. Nothing is inhibiting his expressiveness in this piece; from the efficiently arranged instrumentation to the supple lyricism that washes warmth over the listener with each brooding line it contains, this is straightforward, inviting, and even a bit more embracive than some of the most-buzzed content I’ve reviewed in the past few months.

Zurich’s profile is undeniably underground at the moment, but with the kind of prowess he offers behind the microphone in this single, it’s quite obvious that he’s got the sort of personality the indie circuit won’t be able to contain for very long. His attitude is perfection while his vocal is probably one of the most melodic I’ve listened to outside of the minimalist chamber pop you’d find well to the left of the dial, and if “You’re My Crutch” is representative of his future, he’s going to be in the headlines for a long time to come.

The literacy of these lyrics reached out through the speakers and grabbed me by the throat the first time I listened to this track, and I get the idea that Zurich was intent on giving the verses more of a conversational feel than he ever was the loose form poetry a lot of his peers are going with at the moment.

He’s so approachable with his poetry, and yet there’s a sense of sophistication shadowing his every utterance and making it clear to the audience that we’re not listening to some kind of amateur pop singer. His skillset is a little difficult for even the most discriminating of critics to ignore, and although I tend to be pretty picky about this kind of songcraft, there’s really no denying how much of a presence Zurich has when he’s owning the groove as convincingly as he does from start to finish in “You’re My Crutch.”

This has got to be one of the most ironically positive years for the pop genre that we’ve seen on the western side of the Atlantic in a long time, but among the underground players who have had my attention more than anyone else, Chris Zurich presently reigns supreme. His sound is made for the FM audience that a lot of artists would spend a decade or more trying to bewitch, and at this stage in his career, I don’t think he has anywhere to go but up in popularity and credibility.

There’s a lot of competition he’s facing out of the mainstream, but thanks to the critical approval this latest single is receiving almost across the board, I’m certain that he isn’t going to have much of a hard time transcending the barriers that a lot of his contemporaries would have quite the difficult time penetrating. I’m eager to hear what comes next, and you should be too.