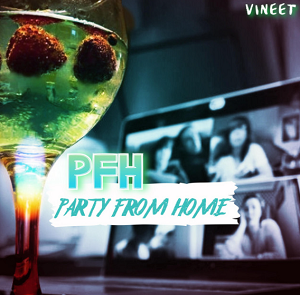 The beat is pulsating like beating heart bewitched by tat of another lover in the new single “PFH” by Vineet, and although this is a single and music video largely inspired by the aftereffect of pandemics, it’s ironically one of the most outgoing listens I’ve had the chance to spend any time with in the past few years. You can always know when an artist really doesn’t have as much depth as they advertise, and conversely, I think you can tell right off the bat that Vineet is someone who isn’t just making music for the heck of it, but genuinely pursuing a career in the medium. He’s a go-getter and a creative mastermind for certain.

Every artist has a trophy case per se, and it’s what they provide us in this case that tells us the most about the kind of narrative they want to construct. The Grammys have been trying to give Vineet the gold for a minute now, but he doesn’t sound like the entirety of his material is being constructed just to get a couple of fresh looks from the critics and award-giving entities of the world. Instead, there’s a lot of personality and unforced swing in this piece, both of which I’ve had a hard time finding in most of the pop music that happens to get approved by critics and a label in ways that an awful mainstream rock song would never be able to be. This is technical, but not at all overboard.

You can’t look at an insular music video like that which Vineet recorded for “PFH” without seeing the cultural tethering between its design and COVID-19, but even with this being the case I don’t think we’re looking at something that is so removed from the world pre-2020 as to sound political or similar to what his peers want to do. It’s getting harder to rebrand the conceptualism that the first part of the pandemic inspired whether we were ready for it or not, and I think artists owe players like this one a real debt of gratitude for it. The highways this singer and songwriter rides are open-ended, and he’s able to take us along for a ride like few others would here.

It’s a good time to be a lover of quality pop music in general, but if you’re into Vineet, this could be a really big moment for you as a follower. “PFH” is getting even more buzz than initially projected by many outlets, and at the rate it’s moving I think that Vineet might be dealing with another chart-topper. He’s got the artistic ambition to do what he wants when he wants in and outside of the studio, but right now I think it’s good this player is keeping things rather conservative all things considered. This is a recording artist who does not need the bells and whistles that his less-than-exciting peers are having to utilize in their own work now, and “PFH” is a song that confirms his eminence beyond argument.