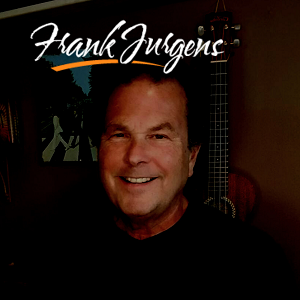 Some songwriters need a lot of energy to get behind a big groove while others simply need a solid harmony to create a profound record, and in the case of one Frank Jurgens, the latter is absolutely true. Jurgens’ new self-titled LP is a testament to the soul he puts down in any given performance, and while he has a lot of attributes that extend beyond his singing abilities, tracks like “Under Jacksons Bridge” and “Whole Lotta Blue” showcase a brooding side of his personality some might not have been prepared for. If you’re a fan of feel-good pop, this is one LP you need to take a peek at as soon as possible.

Behind his delivery, Jurgens isn’t offering anything other than sophisticated intensity, which by no means should qualify as his being reticent to go as hard after a hook as necessary. There’s a lot of magic in the harmonies he’s putting out in “Brown Suitcase” and “That Bottle and Me,” and it begins and ends with the quality of his statements, which reflect a personal approach to lyricism that has become all too impossible to find in mainstream pop anymore. He’s genuine, and it shows in contrast to his peers.

The authentic personality that Jurgens affords his work isn’t limited to his lyrical output, but instead extends itself across verses and instrumentation rather seamlessly, applying a poetic narrative to everything from a groove to a soft tonal expressiveness in the backdrop. Details matter, and this is a situation where the songwriter is such a stickler for intricacy that steering clear of his natural abilities would have been to make an entirely different LP. I appreciate the dedication, and would to see more of it in the mainstream period.

As far as production quality is concerned, Jurgens’ self-titled album is easily one of the more polished indie numbers I’ve had the pleasure of listening to in a long time. There’s no limit to the luster the mix provides the instrumental faceting in this piece, and yet there’s such an aggressive focus towards efficiency that to call any of the content in this album overindulgent would be to admit not listening to it at all. This man knows how to generate balance, and if anyone was about to debate as much ahead of his releasing this all-new, incredibly immersive album, I think they’re going to be made silent with the debut of this LP.

If this is just a taste of what Frank Jurgens still has in the tank moving forward, I think we’re going to be seeing a generous increase in traffic among his content over the next couple of years. His talent is impossible for anyone to argue with, and this is a scenario in which it’s being made to support a sound that isn’t just emotionally charged but spirited in what it has to share with the world. I’m a fan of the Jurgens movement, and I see a lot of other discriminating critics feeling the same way.