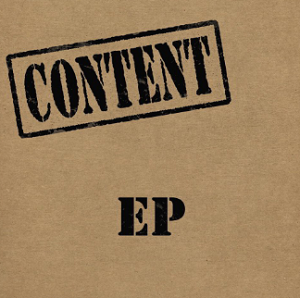 Jacob Kinniburgh’s one-man project Content debuts with a five song EP cut in a self-professed modern New Wave style. I don’t really hear it, however. Kinniburgh’s songwriting is an anagram of styles; keen-eared listeners will hear strands of rock, pop, and even reggae coiling around other threads. The tapestry of Content’s music is varied, brimming with unpredictable turns, and never settling into a pattern for long.

It is even more impressive how he accomplishes this without dropping listeners into unfamiliar territory. Content doesn’t break new aural ground with these songs, but Kinniburgh’s choices with regards to composition break with the any retro inclinations. There’s almost a progressive flair in the way the self-titled EP’s songs refusal to follow one or two musical paths. The Caribbean influences heard are convincing; it never sounds a pale imitation or loving pastiche but, rather, an original artistic work in a longstanding musical tradition.

Those ska/reggae influences are gnawing along the edges of EP opener “Lantern”. The percussion and guitar alike adopt the genre’s clipped swing and speed it up a notch without veering off-course. I am especially taken with the breaks; the warm swell of organ rising from the mix is a pivotal point in the track. It’s an instrument that I believe may be Content’s not-so-secret secret weapon on this release.

Kinniburgh’s voice isn’t a technical marvel, but it’s nonetheless quite capable. His emotive skills are sharp and ideally suited for the idiosyncratic nature of his material. The longing he captures with his voice is one of Content’s chief pulls for listeners and this first song provides him a near-ideal platform for him to shine. “Coming for You” is a chiller, depending on your point of view. I hear it as a disorienting anthem for the last two years with Kinniburgh’s sounding like a gentle Jeremiah pointing the finger at everyone, including himself, as the world falls apart. The guitar work during the refrain stands out as his lead lines slice through the melancholy.

“Inside” moves in an elegant stagger from one verse to the next. Kinniburgh utilizes backing vocals with excellent results once again but it’s his lead vocal that holds my attention. He steers the song forward with confidence in both the arrangement and lyrics; it has the sort of single take spontaneity I associate with true inspiration. The DIY aspects of the releases aren’t noticeable to untrained ears as tracks like “Inside” breathe with the same attention to detail and polish defining major label releases.

The lively “Milk and Honey” features the guest talents of SK Simeon. Simeon allows Kinniburgh to explore his Caribbean influences deeper here than earlier in the release but takes it in a much more personal direction. Marrying the form with a singer/songwriter sensibility pays off enormously for both the artist and listener. The finale “Just the Day” moves away from the clear Caribbean influences though they still echo in the arrangement. This closer is arguably the closest thing to New Wave as I hear it included on this self-titled release. It’s a fine final curtain for Content’s self-titled debut and, like the earlier four tracks, augers well for the project’s future.