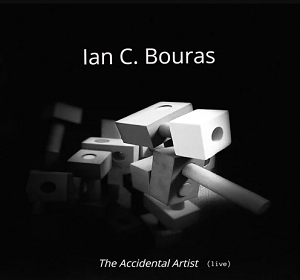 Guitarist and writer Ian Bouras’ latest musical offering, “The Accidental Artist”, is a composition. Bouras wrote the piece for the PVD International Looping Festival and it reflects his long-standing preoccupation with atmospheric and unconventional guitar textures. He utilizes two different Holzer guitars for the performance, as well as an Ebow, a Dunlop volume pedal, TC Electronic Flashback, and runs it all through a Crate amplifier. This deceptively meager setup allows Bouras to invoke an impressive array of emotional tones from the instruments.

His melodic ideas are condensed in tighter frame here than previous work. They are present from the first and patiently developed. Longtime fans of the guitarist are familiar with his cumulative manner of developing compositions. He doesn’t work from riffs but a central phrase, instead, and works the composition up from that starting point.

His musical language is simple, yet eloquent and delicate. There’s a stream of consciousness quality in his music, particularly this piece, where one note builds on another. He emphasizes the space between each one. Judging the merits of Bouras’ work by the standards of rock music or any connected genres is a blunder; he uses the same instruments and much of the same gear, but his take on the guitar’s possibilities is far removed from stereotypical rock histrionics.

Those familiar with Bouras’ work will recognize how he develops his work. Newcomers, however, will acclimate themselves fast to his sound and creative process, however. The deeply personal nature of Bouras’ music doesn’t affect its ability to establish a connection with listeners. Much of this is due, once again, to the melodic skills present in everything Bouras does.

He switches guitars during the second half of the piece. It is obvious Bouras believes this is key for the composition’s artistic success, but many listeners may feel like the track would be just as strong with one guitar. The accompanying video for the song features Bouras in customary surroundings; his previous clips place him in a relaxed and rustic environment. “The Accidental Artist” does the same.

I hesitate to mention Ian Bouras’ neurological disorder. He has lived with Ataxia for several years and is a tremendous advocate for others living with the illness; there’s no question his art has evolved with his medical condition. It is his art, however, that he should be ultimately judged for and not the conditions under which he created it. He doesn’t need or want your pity. Take Ataxia away from Bouras’ biography and his guitar playing and sensitivity to life remains as affecting as ever.

“The Accidental Artist”, despite its title, never risks pretentiousness. Ataxia forced Bouras to change the way he approached his instrument but never altered his base connection to the guitar’s possibilities. He has a painterly effect, each note and loop expanding on the track’s initial impulse, without ever sounding too self-important. Let’s hope Bouras follows this soon with another full length release; he’s one of best instrumental composers working today, any genre, and shows no signs of creative stagnation.