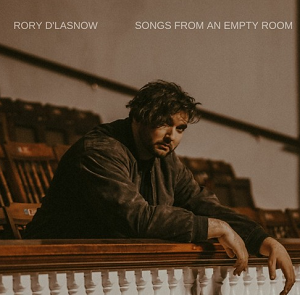 A little humble, more brooding than it has to be, and constantly reinforced by the texture of the string play it’s surrounded by, Rory D’Lasnow’s lead vocal in the new EP Songs From An Empty Room occasionally verges on countrified aesthetics tethering folk-rock and Americana, but it never becomes defined by scene politics. Although I wouldn’t describe D’Lasnow’s sound as fitting in with the lot of hybrid content coming out of the underground these days per se, there’s something special about his crossover songwriting in tracks like “Power of My Love,” “Forgotten,” and “I Won’t Do Anything,” all three of which could make for some stellar singles. Songs From An Empty Room is a versatile piece and one I can verify as being hard to put down once you’ve given it a spin.

Self-control is a big part of the equation for this record, but I’d stop short of saying that D’Lasnow doesn’t know how to cut loose behind the mic. On the contrary, he’s putting up so much of his soul in “Where You Belong” and the aforementioned “Power of My Love” that I don’t know whether or not he could replicate the emotion he has in the studio on stage – but I’m willing to find out for myself. He’s got a disciplined approach, even when he’s going wild with the lyrical depth he wields so elegantly in Songs From An Empty Room, and I think it’s one of the more impressive to come out of his corner of the underground this year.

Tonal warmth is another major ingredient here, and I think that it provides us with a stunner of a song in “Happy (ft. Phil Robinson)” that makes this whole extended play worth picking up on its own. Every one of these tracks is single-worthy, but it’s easy to understand why this particular song is taking off as the most-streamed of the record thus far; between Robinson’s presence and the fluidity of the lyrics D’Lasnow constructs out of bittersweet poeticisms, this just feels like it was meant to scale the charts on the back of nothing more than a melody. There’s nothing wrong with having a sweet centerpiece, especially when it’s a song as provocative and acoustically smooth as this one happens to be.

Emotional, fearlessly unguarded, and constantly drawing us closer to the personality of its creator more than it ever does the cosmetics of his artistry, Songs From An Empty Room is a pretty slick five-track record, and easily one of the best EPs I’ve listened to since the summer came to a close. Without borrowing too much from the hipster gods who came before him, Rory D’Lasnow exploits some amazing Occupy Wall Street-era folk concepts beyond anywhere other artists have taken them in the past ten years in this record, and I think that while it should be a standalone affair, this is a brisk taste of what his next full-length LP could sound like in an ideal situation. I’ll be looking out for its arrival, and you should do the same.