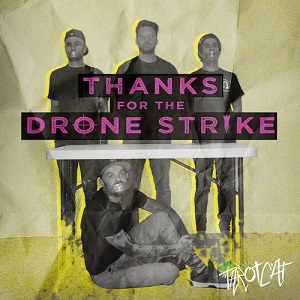 Tarot Cat’s “Am I Dreaming” (SINGLE/VIDEO)

The vocal in Tarot Cat’s “Am I Dreaming” might be coming from a normal, everyday human, but it could still fool most folks into thinking it’s coming from a much more venomous entity just by listening to a minute or so of this fierce punk anthem. “Am I Dreaming,” despite its surreal title, has none of the postmodernity that a lot of pop songs are sporting in 2021, but instead a dark, angry attitude that has become rather difficult to get ahold of in rock n’ roll music as of the last few years (for reasons I can’t even guess). There’s such a thing as being moody to make the material work, but this is a case where it’s the other way around.

Lyrically, “Am I Dreaming” is quite a multi-interpretive piece, and I like that it doesn’t touch on anything overtly straightforward or directly political. There’s a lot of ways you can break down the emotionality of the verses, but that’s just it – we always come back to the passion of the delivery no matter what angle we’re listening to the song from. Scarcely is there a moment where the framework of this single isn’t influencing how we’re made to interpret its meaning, which is a far cry from some of the minimalistic content that the other players both in and outside of this band’s scene have been making lately. This multidimensionality personified, even if it is a street-cut, gut-punching version of such an example in modern music.

Outside of the guitar parts and the vocal, I think the percussion is one of the most important heroes of this track, and not because it creates consistency behind the verses. Instead, I think that the way the drums break up the monotony of any given groove is what gives the swing in “Am I Dreaming” such a drunken, volatile edge. There are a lot of bands trying to fake raw power into their sound, whether it be through artificial means or something else, but what Tarot Cat is doing in this single is more a testament to what they can probably put down in front of a live audience, where no limited studio backdrop would be able to filter out their harshest corners.

Raw and unrelenting, the rock monolith that is “Am I Dreaming” is proof that they don’t make real bands like Tarot Cat very often anymore, and when they do, it’s a pretty big deal. “Am I Dreaming” slaps us around with the kind of absurd potency that a lot of metal and punk songs want to know what to do with but so very few actually are able to shape into anything lucrative, and if there’s a chance that it’s just a drop in the bucket next to what Tarot Cat could be turning out from behind the board in the next few years, it’d be all the more worth making a note of its release today. The bottom line here? This is a single/act combo you can’t afford to miss.