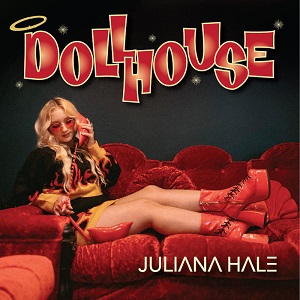 You will be deep into the groove with the new Juliana Hale featuring Wande single, “Dollhouse”. A pop/rap hit with sparkling, driving beats and rapid fire raps, “Dollhouse” showcases this Nashville-based singer’s audacious cadence and baritone tenor. She’s stunning when she sings the notes and even more awesome when she ricochet’s off of Wande’s word assault. “Dollhouse” gives a lot of playful tones, but it’s Hale’s exceptional vocals that solidifies the overall experience.

I believe this song is about dealing with people that are stuck in their ways or judge other people for not being like them. You’re trapped in your dollhouse, Hale sings, with her Cher-like timbre. She has such a soulful ending, like if her voice were made of colors, it would be variants of purple like wine, plum and eggplant. There’s just a richness that I can’t quite describe with accuracy. The backing beat is dot-like, almost circus or carousel like. When she sings, she adds depth to the music bed, and throws off an interesting juxtaposition.

When it comes to Wande’s rapping – wow. The words are just flying by, and you feel like you’re on ride and just trying to keep up. From what I can glean, Wande sings about fake people. I think that when we imagine a dollhouse that kids play with, there’s this façade, a sense of showing what we only want to show. Wande’s style and the lyrics to “Dollhouse” took me to a place where I could easily connect with this feeling of not being appreciated or welcomed because maybe I don’t look a certain way or sound a certain way. You get a real sense that Hale and Wande champion the underdog – the outcast – because they’ve been in those same shoes. You feel Hale’s pain and dare I say it, redemption. You certainly ingest the same overcome-up-ance from Wande’s confident lyric slay. They take you there, and they keep you vibing to that beat with anticipation and boundless connection.

That twinkling music seems to fade into stronger rhythms as the song progresses. As Wande ramps up the words, Hale continues her blazing vocals. She thrills and delivers a performance that can go head-to-head with any of the contemporary R&B and pop artists. I think she sings more than what we’re hearing on the radio lately, and if you’re a fan of the indie genre, you might soon discover she has definite commercial appeal. Don’t hold that against her – I’m rooting for her to make it to the masses and the world’s largest stages. She definitely has the pipes to belt out!

“Dollhouse” follow’s Hales recent single “Crazy” that featured rapper Derek Minor. She has a knack for finding MC’s that align with her style and embolden her already confident take. Hale is a unique voice and comes from a very different artistic viewpoint that I’m slowly crushing over. She’s absolutely magnetic and I’m betting we continue to hear more rousing singles that spotlight her impressive vocals and engaging storytelling. “Dollhouse” is a bona fide hit.