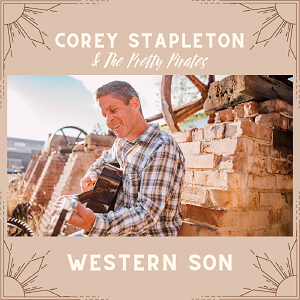 Lyrically, Corey Stapleton is all heart and soul in the new single “Western Son,” which features his band The Pretty Pirates supplying him with a backdrop fit for a king. He’s belting out line after line in this track with the kind of passion that normally we’d hear from a veteran of the game long before we ever would a rookie still trying to make a name for himself, and had I not known otherwise, I would have assumed this to be his eighth or ninth single – not his very first. “Western Son” is telling of his future, or at the very least, his exciting present.

Stapleton’s band frames the lyrical content in this song quite beautifully, but this isn’t what makes his words feel so real. Instead, I would credit the way he’s singing – and more specifically the voice he’s singing with – when it comes to figuring out the source of all the melodic charisma in “Western Son.” He’s got an it factor that you can’t fake into existence, and regardless of how much any of his rivals practice I think they’ve got a long way to go before they catch up to his comfortability in the studio here.

The guitar that backs Stapleton’s singing prominently in the mix is an indispensable tool when it comes to making the emotion in his words stick, and when isolated from the rest of the band I think it’s actually a little sharper in style as well. There’s something eternally sexy about the six-string we discover in a good country song, and this is a scenario in which the guitar is made to be both passive and essential at the same time, skewing minimalist aesthetics with a forward-thinking, melody-first dynamic that I want to hear a lot more of in country as the future unfolds.

The Pretty Pirates’ rhythm section is admittedly a little deeper in the background than the rest of the band is, but there isn’t a moment in which they aren’t contributing as much to the grander scheme of things as Corey Stapleton is on his own. There are no props to come between artists and audience in this performance, but instead a series of creative segues that immerse us in the tale that these players are spinning together, and as much as it pains me to say it, this alone makes “Western Son” a diamond in the rough right now.

I love what Corey Stapleton introduces us to in this, his debut single with The Pretty Pirates, and I think he’s got a lot of potential to do great things with the artistic fundamentals he sets forth in “Western Son.” Clearly there’s plenty of room for him to get a little better at what he’s started up with here, but all in all, I don’t know that there’s another rookie release out in country this fall with the same kind of inspired feel this song has. Simply put, it’s one of a kind, but likely not the last of its breed.